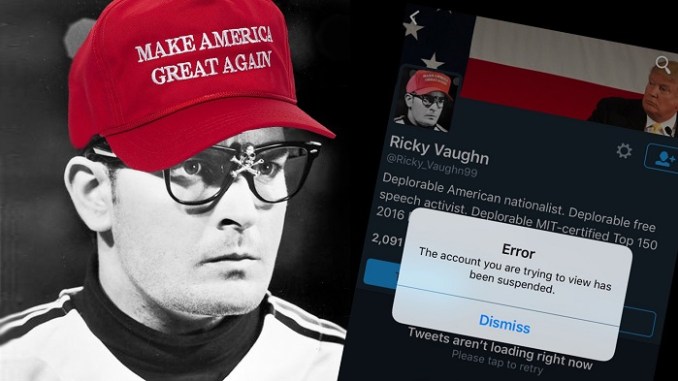 Like everyone else, I occasionally misread a situation. I definitely missed what was going on in 2012 when a significant groundswell of grass-roots activists flocked to the campaign of Ron Paul. At the time, I thought it might represent a rising libertarian tide. Yesterday I was reminded that it did not when The Huffington Post published the identity of the leading alt-right Twitter personality Ricky Vaughn. The profile they wrote on him described something I’ve seen a lot of. His first involvement in politics was with the Ron Paul campaign.

I would like to see data for the propensity of former Ron Paul voters to become early Donald Trump supporters. In its absence, I was buried under anecdotes of this predilection in 2015 when I saw so many of these people who had previously held a messianic faith in a man that called for monetary austerity and opposed all trade barriers suddenly switch to a new quasi-religious belief in a guy preaching the devaluation of the U.S. Dollar and American mercantilism.

I taxonomize Trump voters into two kinds. Most are just Republicans who embraced him because he got the GOP nomination and naturally considered him a better choice than Hillary Clinton. There’s plenty of rational basis in that choice. The second kind seems less endowed with rationality. These are people for whom, out of more than a dozen high-quality Republican candidates with governing experience, adult temperaments, and actual knowledge of public policy details, Donald Trump was their first choice.

I have quite a few Facebook friends who were key leaders in Paul’s 2012 campaign, and I was a little shocked by how so many unhesitatingly leaped from libertarianism to Trump-is-my-first-choice nationalism. Seven years ago, I became a magnet for their acquaintanceship when I wrote about the way the Paul campaign was mistreated by the Oregon Republican Party leadership in the 2012 district conventions.

I noticed a few red flags, but I never connected the dots. One was a tendency to post clips from RT (Russia Today) on social media. Putin’s propaganda tool did often give a platform to Paul and other libertarians, but Paul got plenty of mainstream U.S. media airtime as well. Why this fixation on a Russian government channel?

Somehow I failed to connect the trend with a strange encounter I had at the 2012 Gathering of the Eagles, a now-defunct Tea Party event. Trevor Loundon, a somewhat zany New Zealander, had given a talk warning that Russia was plotting a communist takeover of the United States. During the Q&A, a prominent organizer for Ron Paul in Lane County challenged Loundon’s thesis on the grounds that this Paul activist believed Putin is a devout Christian and would never do such a thing. I also challenged Loundon’s absurdity, but did so with an analogy to the realism in Thucydides‘ history of the Peloponnesian War, that it was the fear Athens drove in Sparta that caused the conflict, not Spartan aggression. Loundon may be wrong, but who would arrive at that conclusion out of a belief in the Christian charity of Vladamir Putin?

Then there were the conspiracy theories. I first learned of Alex Jones and Infowars from the Facebook posts of Ron Paul campaign volunteers. I knew there were 9/11 Truthers out there, but I thought they were as obscure as bona fide flat-earthers. I’d never actually met one until my encounters with the Ron Paul campaign made them seem plentiful.

It was only later that I began to understand that Ron Paul, though a true libertarian himself, attracted people who lacked any coherent sense of political ideology. Paul projected a strong appeal for people who gravitated to what’s different, people who have a penchant for rejecting the mainstream. For these kinds of people, it’s not a thought-out worldview; it’s a lived-out lifestyle.

This was finally driven home to me recently when debating Donald Trump’s monetary policy with an old die-hard Paul campaign operative who had led many crowds seven years ago, chanting “End the Fed!” Having taken Professor Richard Ebeling‘s year-long course in Austrian Economics at Hillsdale College in the 1990s, I was supportive of this central issue of the Paul campaign. I knew enough about the Austrian Theory of the Business Cycle to agree with Paul’s critique of the FOMC‘s policies.

So when Trump campaigned on a loose monetary policy and even frequently suggested we can monetize our debt, I thought this old Ron Paul campaigner would be concerned. He wasn’t, because Trump has also said he supports an audit of the Fed, and that’s all this Paul-turned-Trump supporter thought is needed. He had no idea what this buying and selling of Treasury Bonds that I referred to was all about. This guy thought the point of ending the Fed was to end the Rothschild Family‘s global domination and an audit would show the world the malevolent deeds these Jews had been inflicting on the world since 1913. A Fed audit would unite the people against these “powers that be” he told me. As these crazy words were spoken to me I asked myself: how did I not see this back in 2012?