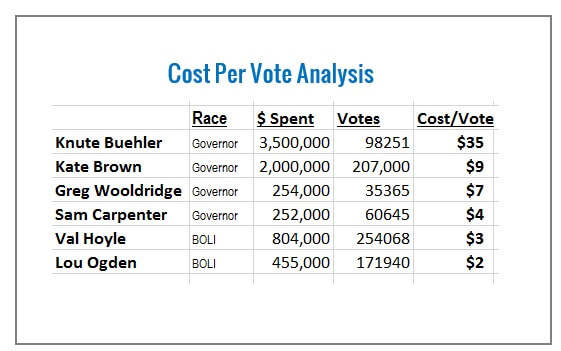 Among the two statewide races of Governor and Bureau of Labor Commissioner over seven million dollars was spent between 2017 and 2018 on these races.

Sam Carpenter performed the best cost-per-result campaign in the Oregon governor’s race by spending 252,000 to attract 60,000 voters at a cost-per-vote of $4.  Knute Buehler spent a very surprising $35 per voter result.   We must not overlook Governor Kate Brown who spent two million dollars just to win her Primary seat against no organized opposition.

Among Bureau of Labor race, Lou Ogden performed the best cost-per-result campaign with a $2 per voter reached ratio.