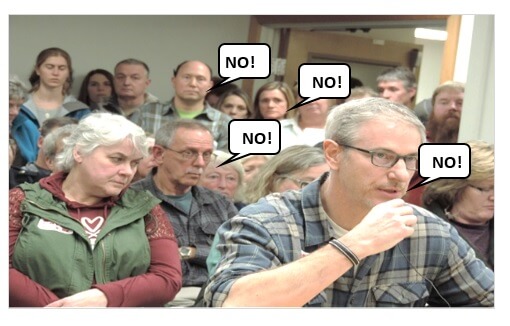 Despite the fact that Oregonians have rejected a sales tax nine times, revenue-obsessed politicians have been feverishly trying to pass sales taxes at the local level, hoping sales taxes will spread to every city and county in Oregon.

Just last fast fall, the Ontario city council became the first city in Oregon to pass a sales tax, but the Taxpayer Association worked with local small businesses and launched a referendum repeal drive.   It was insane that an Oregon border town to a sales tax state of Idaho would adopt a sales tax.

The end result: In May of this year, nearly two-thirds of Ontario voters soundly rejected the council’s sales tax.  One of the chief petitioner of the referendum repeal petition campaign, Dan Lopez, said, “We simply could not have defeated this tax without the Taxpayer Association.”

That’s not all. In January 2018, Hood River County began floating a sales tax. The county did so even though the city’s own polling showed voters did not want one. Frightened small business owners began asking the county why?   The responses they got ranged from “We want to be the first in Oregon to pass a sales tax” to “We’re going to pass this tax no matter what you say.”  The Taxpayer Association sprang into action. We helped organize local citizens and voters to attend the public hearings – it was standing room only (see photo above). The response was so enormous that the county pulled the sales tax from the agenda.

— The Taxpayer Association  has been successfully stopping local sales taxes since the original 2005 Wood Village sales tax battle 13 years ago.  If you appreciate that we have been killing sales taxes for 13 years, then please consider making a donation so we can fight the next round of local sales taxes.  There are multiple ways to help (tax credit, charitable deductions, etc.) the pro-taxpayer movement.

— Spread the word by liking, Tweeting and emailing this article.