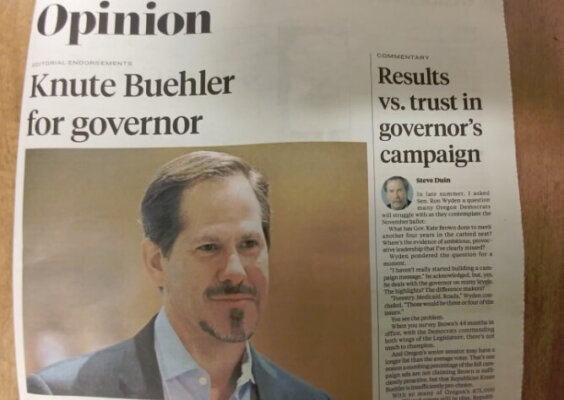 By Taxpayer Association of Oregon PAC

The state’s largest newspaper, The Oregonian, provided a resounding endorsement for Knute Buehler for Oregon governor. In the same edition, writer Steve Duin, wrote an article that cast shade on Brown. Duin mentioned asking Wyden on why he should vote for Brown and even Wyden appeared to initially stumble on a lackluster response.

Here are some gems from the Oregonian editorial endorsement:

“With little vision and no urgency by Brown in her nearly four years as governor, and insufficient experience from Independent Party nominee Patrick Starnes, voters fortunately have a strong alternative. Oregonians should vote for the candidate who is willing to take courageous action on these entrenched problems and mark their ballots for Knute Buehler.”

“But it’s not his background so much as his priorities and concrete ideas for Oregon that should win over voters. Improving the quality of education for Oregon’s K-12 students is his top priority with an ambitious goal of moving the system from the bottom five in the nation to the top five in five years. More than any other aspect of state government, K-12 education illustrates Brown’s profound failure to lead.”

“But in nearly four years as governor, Brown never owned the role. It’s time for Oregonians to give it to someone who will.”

The Oregonian newspaper rightfully sees that Oregon needs an actual governor and not a political place holder for which Kate Brown has become. I hope everyone will vote to elect Knute Buehler for Governor and help get Oregon on track.