The Republican party is expected to suffer big losses tonight, but there are reasons to hope and reasons to still vote.  Here are four statistical indicator theories that favor Republicans. 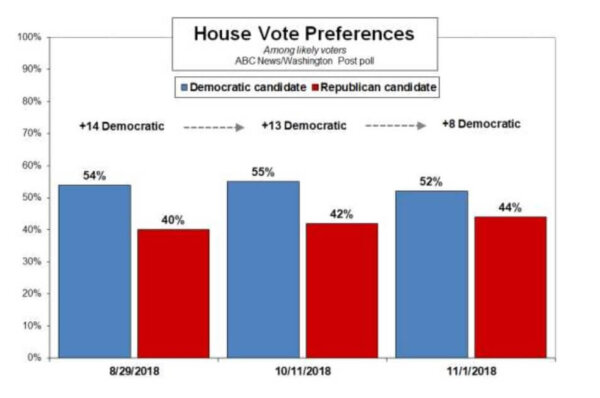 “Voters in both parties are now showing equally high interest, erasing a Democratic advantage seen in prior surveys this year.The Democratic Party held a 50%-to-43% advantage among likely voters on which party they preferred to lead Congress, slightly narrower than the 9-point edge the party held in mid-October.”

#3. Karl Rove explains some of the missing math to the predictions.

In 9 of 10 midterm elections since 1974, 90% of incumbents are re-elected. In 2016 it was 97%. For the Democratic sweep to occur as the Cook Report is predicting, 8%-13% of existing 197 incumbent Republicans in Congress must be defeated. Defeating more than 10% of incumbents would be out of historical norms. See video here.

#4. A former Vegas oddsmaker who accurately predicted a 2016 Trump win wrote this about 2018 on Town Hall;

“Back in 2016 I predicted a Trump victory when no one else did. Every poll showed Trump would lose by a wide margin. Nate Silver of the NY Times predicted Hillary’s chances of winning at 92%. These pollsters make their living by polling actual human beings. I don’t. So how did I know? Simple. First, size matters. You could see it in the rallies. Trump would attract eight hour lines and 10,000 or more attendees at wild, intense rallies all over America. I should know. I was opening speaker for six Trump campaign events here in Las Vegas. Meanwhile Hillary was attracting 100 to 200 attendees at a rally here in Vegas. I could fit Hillary’s rallies in my living room. The same story held true across America. That was my first reason for realizing Trump was going to pull a huge upset that few saw coming…”

“…I see Florida Democrat Governor candidate Andrew Gillum holding a rally with Bernie Sanders and the whole place is empty. Barack Obama could not fill a high school gym in Milwaukee. I witnessed firsthand Joe Biden and Obama at separate events here in Las Vegas playing to small crowds. Meanwhile I was opening speaker for President Trump’s event in Las Vegas last month- with 10,000 waiting in line for hours in a place where no one cares much about politics. This is a phenomenon. “