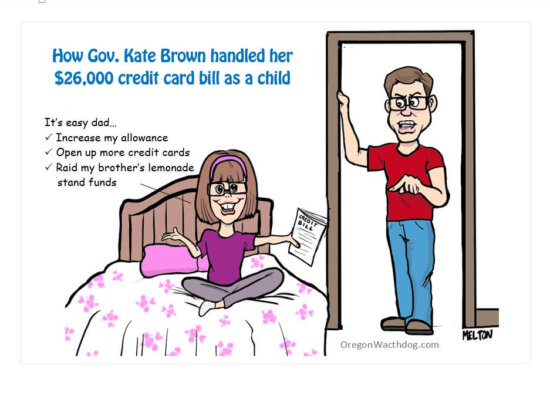 By Taxpayer Association of Oregon
OregonWatchdog

Your wallet, your business and even non-profits are not safe under Governor Kate Brown’s plan to fix the $26 billion government PERS pension crisis.

Gov. Brown has proposed a rash of new tax hikes which include widespread surcharges on license fees Oregonians have to pay in order to have a job, visit a park or get married. Brown also proposes to steal the current Kicker Tax Refund of over-collected State tax funds. The current Kicker Tax Refund is expected to return an average $336 in refunds to Oregon taxpayers in 2020.

One of the most reckless ideas Kate Brown has is to raid the state’s accident insurance fund reserves called State Accident Insurance Fund (SAIF), by as much as $500 million. As a private non-profit, SAIF is one of the success stories of the State of Oregon since it has kept workers costs low.  Looting SAIF to bailout pension costs could have the effect of increasing worker compensation insurance costs which would be felt across the entire workforce in the state.

So here is her plan in review:

– Hike hundreds of license fees for things completely unrelated to what the fee was created for. (Fee surcharge)

– Loot and damage one of the State’s most successful programs to bailout the State’s worst performing program. (SAIF raid)

– Raise the cost of working to pay for people not working and their above national standard retirement. (occupational fee increase, SAIF raid)

The principles behind her plan resemble those of a poorly run company on the verge of bankruptcy or a problem gambler. Gov. Brown did offer some small changes to the existing PERS system, but not enough to make a meaningful impact nor stem the call for billions in higher taxes and wholesale looting of people and institutions.

Call your lawmaker to oppose any Kicker Theft or SAIF raid to bailout the PERS pension scandal.

— Help us fight tax increases in the State Capitol as we have done for 20 years!!! — Make a donation to the Taxpayer Association of Oregon.