“Kept a Tax Increase Away From Voters…
They made it more difficult to collect signatures.”
Willamette Week, July 24

“… sneaking in a sales tax…
consumers will pay without being able to see what they pay”
The Bend Bulletin, July 1

The 2019 Legislature was one of the most corrupt legislative sessions in modern history.

All three branches of government were under one-party rule and large supermajorities in the House and Senate had not been seen in 47 years. There was no check on power at all. This was used to disenfranchise voters, punish minority voices, ramrod legislation, remove transparency, reduce citizen participation and block citizens’ right to vote.

Governor Brown went as far as to make open threats against the minority party when she told a reporter, “revenge is a dish best served cold and slowly”. 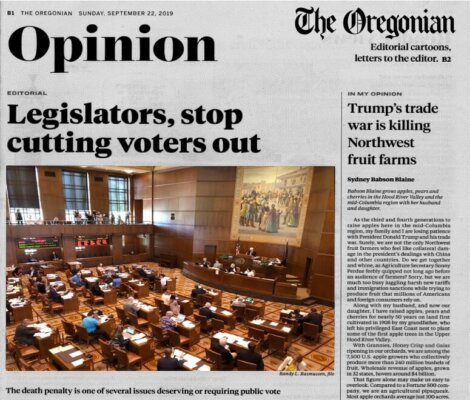 Four cases of violating the will of the voters

#1. By over two-thirds vote, Oregonians put the Kicker Tax Refund law into the Constitution (measure 86) to prevent politicians from stealing their refund checks.  The politicians passed HB 2975, which used a budget gimmick to steer nearly a quarter billion of kicker refunds back into the politicians’ hands.

In the case of drivers cards, they attached an Emergency Clause, which put the law immediately into effect. This blocked voters from launching a 100-day referendum repeal petition campaign. When the politicians stole part of the Kicker (HB 2975) they also put an (fake) Emergency Clause on it so voters could not petition against it. The $700 million carbon tax, HB 2020 did not pass, but also had an emergency clause to block voters. No matter where you stand on immigration, taxes or climate issues, it is simply wrong to censor voters from their right to dissent.

After the politicians passed the largest tax in Oregon history (a $2.6 billion business sales tax), voters instantly filed a repeal referendum petition so the public could have the right to vote on the tax. To silence voters, the politicians quickly voted to make retroactive changes to the tax.   This had the effect of cancelling out the petition drive in its tracks, which was based on the old language. 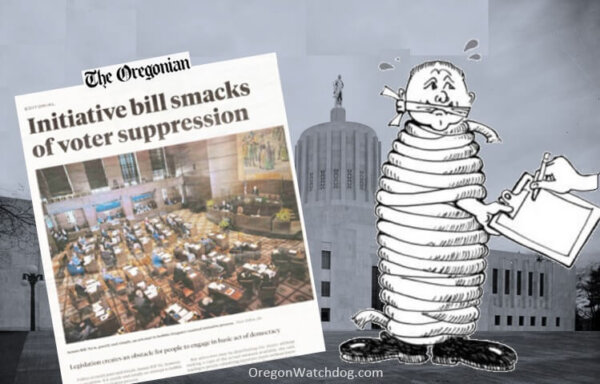 The politicians passed a bill that made it extremely difficult for ordinary voters to download petitions on their computers and print them out at home. The state’s leading newspaper decried that this was “blatant voter suppression.”

Politicians who voted to scale back the death penalty promised that it was not retroactive, that it wouldn’t affect the people currently on death row. But that was then. After the bill passed, we learned that the bill is, indeed, retroactive and applies to nearly every single death row criminal.

To defend the politicians’ public lie, supporters now say that the word “retroactive” means something different to them than it meant to the general public, the media and the lawmakers who voted on it.

Once the lie was exposed, Oregon newspapers across the state began asking for a public vote.   The Democrat Herald Editorial chastised lawmakers for wasting time “figuring out clever ways to sideline voters.”

The Governor and lawmakers refused to correct their dishonest error with a Special Legislative Session and refused to allow a public vote.

Lawmakers praised themselves for passing a PERS reform bill (SB 1025) to help address the $27 billion public pension debt. This cost-saving bill was a lie because it made things worse by stretching out payments over time—costing taxpayers more. There was a symbolic and cosmetic 1% cut, but it didn’t apply to the 383,000 current PERS retirees (who make up nearly 10% of Oregon’s entire population). The cut only applied to new retirees who, despite the cut, will still receive pensions greater than the national average.

The politicians tried to sneak the $700 million carbon tax (16-cent gas tax) HB 2020 past voters. They said it was a “climate bill” or “investment bill” and not really a tax – despite raising $700 million in higher taxes. By labeling it not as a tax, they were able to avoid the 3/4th rule required for all taxes. A Senate Republican walkout in protest led to the defeat of the bill.

Oregon Public Records Advocate Ginger McCall resigned citing “Abuse of authority”.  Ginger McCall said  she was censored, intimidated and pressured “to secretly advance Brown’s agenda” and against the very duties of the Public Records office. Leaked memos show that the governor was publicly advocating for transparency laws, but secretly lobbying against them behind closed doors.  The Oregonian said that it showed “disrespect for transparency, independence and the rights of the public to know what its government is doing.”

They didn’t know what they were voting on

Many of the most controversial taxes were put into a special joint committee hearing process that had the effect of blocking lawmakers from offering minority report amendments on the floor.

There was a rash of same-day amendments, sometimes 100 pages long, that were dropped on the committee just hours before a vote. Surprise gut-and-stuff amendments meant the minority political party of lawmakers, the media and the public didn’t know what was being voting on while the majority party somehow had advanced briefings. Furthermore, lawmakers were not able to ask questions of the amendments’ authors, because the authors’ names were often kept secret.

— Here are four good reasons to support us. 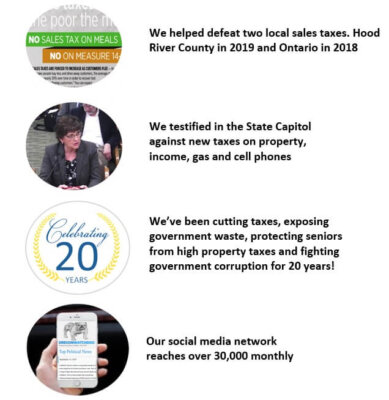