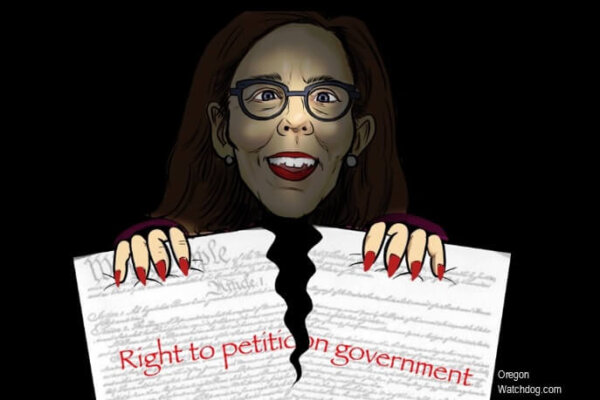 — Tell the Governor to vote no on HB 2164
By Taxpayer Association of Oregon
OregonWatchdog.com

By engaging in petition language sabotage the politicians can basically void ANY voter-based petition effort. This is outright subterfuge, subversion and antidemocratic attack on voters. Consider how far this will go. For example, imagine the politicians pass a law paying themselves a million dollar salaries. The outraged voters rebel with a petition drive to repeal it. The day before voters turn signatures to over-turn the law, the politicians gather to pass a new law changing some of the language and upping the salary amount to one million and one extra dollars ($1,000,001) thus making the petition effort at risk of being outright voided.

We must stop HB 2164.  This bill, HB 2164 subverts the people’s petition process by sabotaging petition #301 which is to repeal the $2.6 billion sales tax.  If HB 2164 passes, it will virtually destroy the people’s petition campaign to give voters a right to vote on the $2.6 billion business sales tax.   No initiative petition will ever be truly safe if this type of subversion and petition cancellation is allowed to continue.

The Governor has only a handful of days left to decide on this bill which is before her desk awaiting her signature.

Tell the Governor that it is wrong to sabotage the people’s petition effort and it is borderline criminal to rob the people of their right to vote on matters they care about.  Politicians should not be able to subvert and void the people from using their initiative process to petition their government.

— This is the type of voter suppression and grotesque political corruption that every single Oregon voter must read!!!!!  Please, please, please spread the word by Emailing, Tweeting, Liking this article.

— Please donate: The Taxpayer Association of Oregon has been fighting for you and for lower taxes for 20 years. Please donate here .