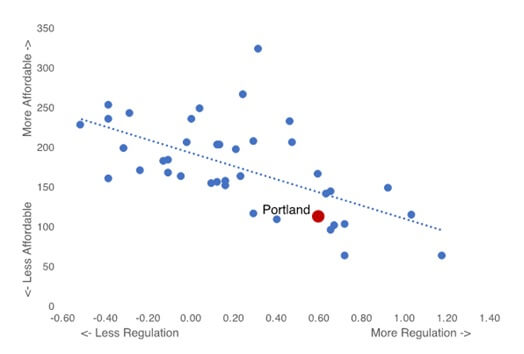 The Affordable Housing Problem:
A Self-Inflicted Emergency
By Eric Fruits

Oregon, along with much of the West Coast has a housing affordability problem. Oregon House Speaker Tina Kotek is asking the legislature to declare a “homelessness state of emergency” that would allocate $40 million to build new shelter beds and ease permitting requirements for new shelters. Portland is now in its fifth year of city council declared “housing emergency.” Policymakers are quick to point fingers at the federal government, developers and immigration, but they’re pointing at the wrong people. For example, on his official blog Portland mayor Ted Wheeler concludes:

Our city is in the midst of a housing affordability crisis, brought on (in part) by decades of massive disinvestment in federal funding for affordable housing, an underinvestment in housing development during the Great Recession, and a rapidly increasing local population that has created a significant supply and demand issue.

Josh Lehner, an economist with the state’s Office of Economic Analysis reports housing construction in Oregon is at “near historic lows”:

The truth is, as usual, we have only ourselves to blame. While it can be argued that reduced federal funding and increased in-migration play some role in the undersupply of affordable housing, these factors fail to explain the undersupply of housing overall —both affordable and market rate housing. It is state and local regulations that inhibit, if not stifle, new construction and contribute heavily to reduced housing affordability.

Research published this month by the National Bureau of Economic Research shows regional differences in local land use regulation go a long way toward explaining differences in housing affordability.

As shown in the figure below, the Portland region is one of the most highly regulated housing markets in the U.S. and has some of the worst housing affordability in the country. In these ways, Portland has much in common with Seattle, Los Angeles and San Francisco.

The NBER paper’s findings are consistent with those of Randall Pozdena, who estimates that a higher rank in the Sierra Club’s state ranking of “anti-sprawl” land use regulations is associated with reduced housing affordability. Pozdena concludes that because of “aggressive anti-sprawl” policies, the supply of housing in Oregon is 18% below that needed to maintain housing affordability.

Oregon’s urban growth boundaries limit the supply of buildable land for housing. In Oregon, every urban area has an urban growth boundary (UGB) surrounding it. The law effectively bans residential development outside of a UGB. These boundaries, unique to Oregon, are what separate us from states with better affordability.

In 1979, the year Portland adopted its UGB, Anthony Downs from the Brookings Institution presented research to the League of Oregon Cities predicting the UGB law would contribute to higher housing prices. Over the past 40 years, supply remains constrained, resulting in rapidly rising housing prices. For example, since 1987 (the earliest year for which data is available) the S&P/Case-Shiller home price index for Portland has increased at a rate 50% higher than the national average.

“We’ve seen the spigot turned off so completely, so fast,” says Kurt Schultz, a principal at SERA Architects, who notes that his clients who’ve worked with similar policies in other cities often blanch when told of Portland’s strict IH rules. “I’ve never seen it turned off so fast before, and I’ve been doing this for 30 years.”

Portland’s design and/or historic review process can add months of delay and thousands of dollars in additional costs to multifamily projects. Approximately 60% of Portland is covered by either design or historic review regulations.

Local system development charges are out of control and Portland’s are among the worst. Portland’s system development charges (SDCs) for sewer, stormwater, transportation and parks total more than $25,000 for a new single-family home. In many cases, the fees charged have no relationship to the costs associated with a particular system. For example, an 800-square-foot addition to an existing home in Portland will trigger about $6,000 in SDCs for parks and transportation.

A 2019 report prepared for the Oregon Housing and Community Services Department by Blue Sky Consulting Group supports these conclusions. The report identifies state and local regulations and taxes as key factors driving up the costs — and reducing the supply — of affordable housing in Oregon:

• Community opposition, which can be implemented through the design review process. Their analysis indicates that projects that had four or more community meetings cost 8% more on average compared to those that had three or fewer community meetings.

• System development charges. Since the year 2000, the authors report the average cost associated with local SDCs have grown almost three times faster than the overall costs of developing affordable housing. They estimate SDCs add $8,000 in construction costs per unit on average across the state.

Homelessness and housing affordability are related to each other. While many factors contribute to homelessness, misguided state and local policies are to blame for Oregon’s housing affordability crisis. Our land use laws limit new construction, our design review regulations micromanage projects into insolvency, and our SDCs treat new housing as a piggy bank for local governments. Without substantial reforms to these policies, politicians can declare emergency after emergency, only to see housing affordability worsen and worsen.