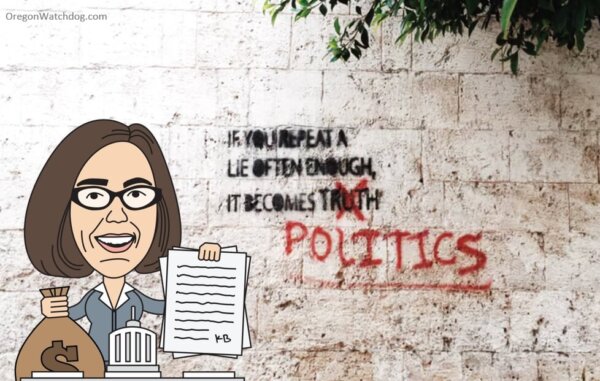 On March 18, Kate Brown proclaimed increasing COVID19 testing capacity one of her top priorities, and said “The Oregon Health Authority has signed an initial contract for 20,000 tests with one of the private providers.” Governor Brown’s Chief of Staff, Nik Blosser, said an initial batch of 5000 kits would be available “any day now.”

The truth is that the state did not sign a contract until two weeks later, on April first, and the contract was for only 10,000 tests.

Now the state says those tests will not even be used to test Oregonians unless there is a surge in COVID19 cases.

When questioned about the tests by the Oregonian newspaper in the days following Governor Brown’s announcement, Chief of Staff Blosser retracted his statement, and blamed the federal government for inadequate test kits and supplies.

The scope of the lies did not come to light until a copy of the state’s agreement with supplier Quest Diagnostics was obtained through a public records request. Under the agreement, Oregonian will pay up to $69 per test kit.

According to Quest spokesman Robb Cowie, Oregon health officials have not asked for any test kits or testing supplies to be delivered as of April 8.

This puts the burden of testing on hospitals and private labs. Of the 23,000 Oregonians tested for COVID19, fewer than 3000 had their specimens analyzed at Oregon’s public health lab. Testing is still not available to the general public, and is limited to those already sick.