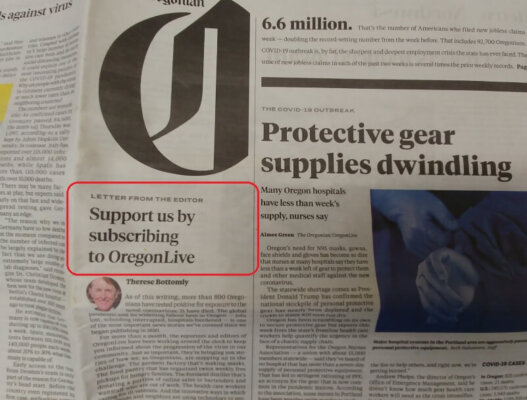 The Oregonian recently put a direct appeal to subscribes on their front page on April 3rd.

Here is what is happening behind the scenes.

Traditional online news media have seen a surge in readership due to the virus. At the same time advertising has dropped.

It is hitting media and social media companies very hard:

–  28,000 employees of news media companies have been laid off during virus outbreak.New York Times

– Facebook, Google could lose $44 billion in ad revenue due to virus (Variety)

– This could be the first ever ad decline for Google. (BGR)

The importance of local media can be attested to the article adjacent to the subscriber appeal on the front page of the newspaper image we provided “Protective gear dwindling” which was a superb article that helped inspired our office into action.

Over the years, scores of major longstanding newspapers have folded across America while other ones have bucked the trend by reinventing themselves which resulted in increased readership and ad revenue.  Media bias continues to be a leading reason why many readers, especially conservatives, have stopped subscribing.

Local and traditional media is important to taxpayers and all Oregonians.  (After all, we could not have possible assembled all the news data to report this article without vital media reporting by others). We hope they take the phenomenon of increased readership from the virus and translate it into longtime readers and advertisers.