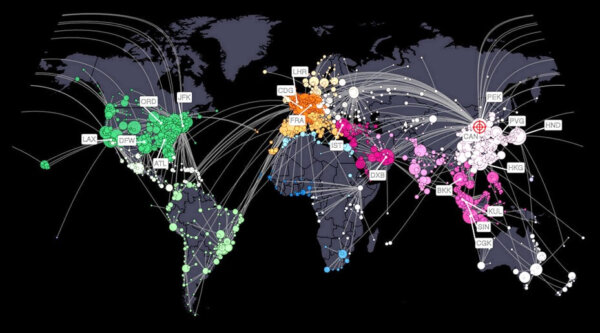 Fact: Virus cases could’ve been reduced by 95% if China had acted three weeks sooner according to Southhampton University.

December 30 – Wuhan doctor, Li Wenliang, discovers the virus in his patients and sends a private text message to his medical colleagues.  Within hours of sending the text police showed up to his door. (2)

December 30 – Chinese labs successfully sequenced the virus genome but are order by government officials to discard samples and not disclose their results. (29)

 January 2 – Wuhan police arrest eight people for the crime of spreading “rumors” about the coronavirus. (3)

 January 6 – China blocks U.S. efforts to send CDC experts into Wuhan.  China does not allow CDC experts into the country until roughly 42 days later.  By then 75,000 infections were reported in China and numerous cases in America. (6)

 January 8 – China announces publicly it has discovered the COVID-19 virus but claims that it is not a threat because it doesn’t transfer from human-to-human (even though it knew it did back on Dec. 6th). (7)

 January 8 – China downplays the virus as to not alarm Chinese New Year festivals which are celebrated throughout the month. (8)

 January 14 – Despite Taiwanese officials bringing evidence to World Health organization (WHO) that the virus can be transferred from person-to-person, WHO, under pressure from China, refuses to acknowledge Taiwan’s evidence and instead publishes the official Chinese line in a false statement to the world that read; “Preliminary investigations conducted by the Chinese authorities have found no clear evidence of human-to-human transmission”.  A week later, WHO was forced to retract that false statement.

 January 18, – The City government of Wuhan holds its annual banquet where 40,000 families share home cooked meals this despite the government knowing of the outbreak.  (9)

January 20, – China finally discloses to the world that the virus transmits from human-to-human.  It sat on this critical life-threatening information for 46 days. (10)

 January 21 – By the time China admitted to the world that the virus was a human-to-human transmission threat it was too late because it was already in America. The first case would be diagnosed in Snohomish County Washington (roughly 200 miles from Portland) and hours after China’s late announcement. (11)

 January 31 – President Trump ignores the WHO recommendation and issues a halt to all flights coming from China.  He is attacked by liberals and media.  By this time over 700,000 passengers had already come in from China and another two million from around the world into the U.S. during the outbreak period.  (12)

 Feb 7th, — Chinese government controlled media reports that Dr. Li (who first reported the virus) has died.  Shockingly, hours later all news stories about his death are deleted from the internet. China’s media begin publishing new articles announcing that Dr. Li was, in fact, alive.  Hours later, Dr. Li was reported dead (again), this time by the hospital where he worked.  He died of COVID-19 – the very disease he was forced by police to say did not exist. (13)

 March 12th – The Official Foreign Ministry spokesman for China suggests the U.S. military as a suspect in spreading virus in Wuhan. (14)

 March 17 – China expels journalists from the The New York Times, The Wall Street Journal and The Washington Post. (15)

March  – China orders their empty factories to turn on all their lights and start burning coal to emit smoke from their smokestack as to make it appear before American satellite surveillance into thinking that China’s manufacturing was back to full capacity when it wasn’t. (16)

In the end, the Chinese people (like many doctors) were trying to spread the alarm and help but the Communist Government spent nearly two months censoring both life-threatening and life-saving information from its own people, the World Health Organization and the rest of the world. 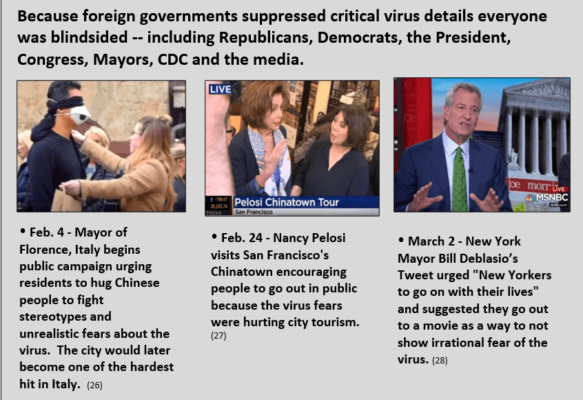 What happened in Iran

  In early January Iranian doctors reported a mystery virus that was killing dozens of people within days.  Iran’s government censored reports as to not cause political embarrassment for the upcoming February Parliamentary election.  Officials kept doctors in the dark and instructed them to simply send sick patients home. Pilgrimages to holy city of Qom, ground zero of the outbreak, continued for weeks.  Crowds continue to gather around the shrine of Fatima Masumeh, touching and kissing it.  (17)  (18)

 As China’s connection to the virus became clear, Iran further censored the outbreak out of fear upsetting their close ally because China supplied them with weapons and their economic aid was one of the only things helping keep Iran from financial collapse resulting from the crippling United States sanctions.

Because Iran hid the virus, more than 10 Middle Eastern countries trace their virus outbreak to Iran. (18) (19)

Why was Italy hit so hard?

 Italy is home to both Europe’s largest Chinese population city (Milan) and also Europe’s largest concentration of Chinese residents in a city (Prato).  There are now more Chinese garment manufacturers than there are Italians ones.   This is the result of longstanding close connections with China as Italy was the first one to offer direct flights (Europe-to-China) over 50 years ago and Italy was also  first among the G-7 country to accept China’s ambitious Belt and Road Initiative.   This is why the Mayor of Florence publicized effectively a “hug a Chinese” campaign to downplay virus fears and stereotypes as a way to protect their Chinese community which had become so critically important to Italy’s survival  — especially since Italy has been suffering staggering economic problems for years.   (20)

 Italy’s government run health care is considered to be among the worst run in Europe, suffering from a hospital bed shortage crisis before the outbreak. Northern Italy has one of Europe’s highest concentrations of older citizens.   Also, Italians popular culture of ignoring the rules led many to continue to visit restaurants and pubs despite efforts to close them down. (21)

In conclusion, Italy proportionately had higher populations returning from the infected areas and then struggled greatly on how to deal with it.

How did South Korea recover so quickly?

  South Korea had a widespread MERS virus outbreak in 2015 which dramatically reshaped the nation’s healthcare response and made mass-testing a possibility.   They closed and disinfected any location (library, store, etc.) where an infected person visited.  The population engaged in mask wearing earlier and at higher rates than most of all other nations (22)

The Senator who predicted it first

  U.S. Senator Tom Cotton as early as January 22 urged a flight ban from China and later telling people this virus was going to have a worldwide importance.   Senator Cotton ignored what China’s government was saying to the world in January (which no one knew it was untrue) and instead looked at what China was quietly doing (closing schools, banning domestic travel, putting 75 million people in lockdown) and was able to see through the falsehoods. (24)