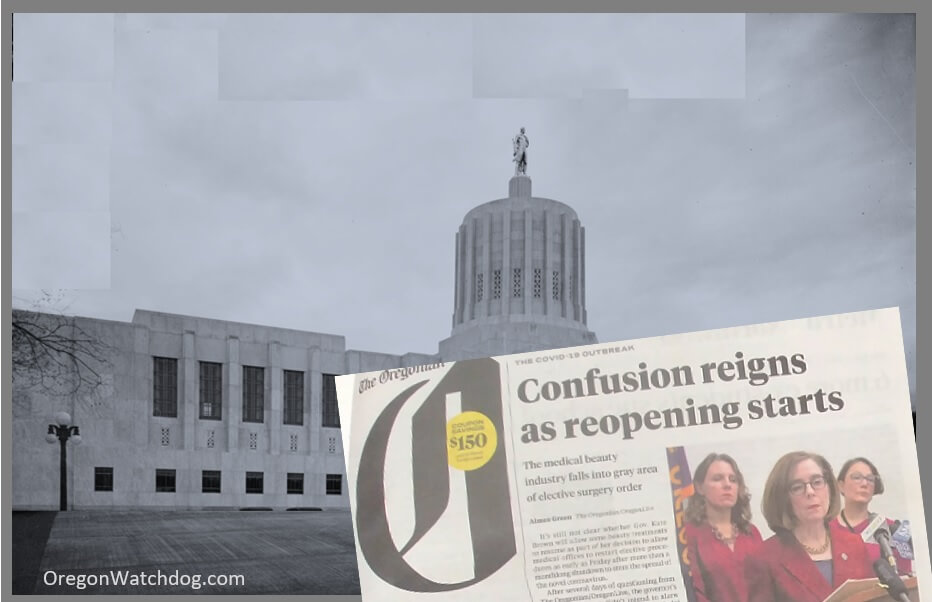 Four separate times the media criticized Governor Brown over high profile failures, making it one of the worst weeks of the outbreak.
Taxpayers Association of Oregon
OregonWatchdog.com

Here are the four times the media criticized the Governor over her decisions last week: 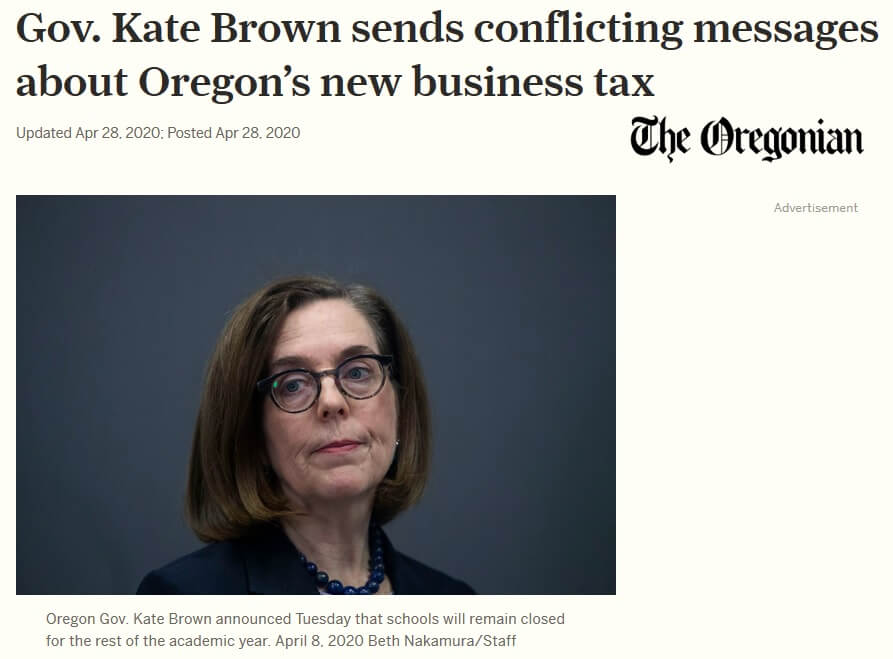 – On the important April 30th tax deadline for the newly adopted $1.3 business sales tax (Corporate Activities Tax), Governor Brown pledged to business that because of the virus outbreak (and pre-existing confusion over the tax) there would be no penalties for the first filing deadline. Within 48 hours Brown reversed herself, which not only shocked the business community but sent many businesses scrambling with the tax deadline days away. A mere 100 hours from the deadline and the Governor’s office was still trying issue calculation guidelines on the tax. 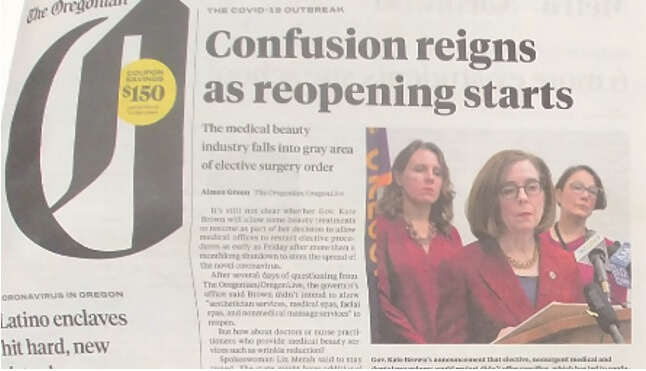 “Confusion reigns as reopening starts”
– Governor Brown announced the re-opening of elective health care services but failed to offer specifics. An Oregonian survey found mass confusion in the industry with some believing the order allowed them to re-open and others just the opposite. 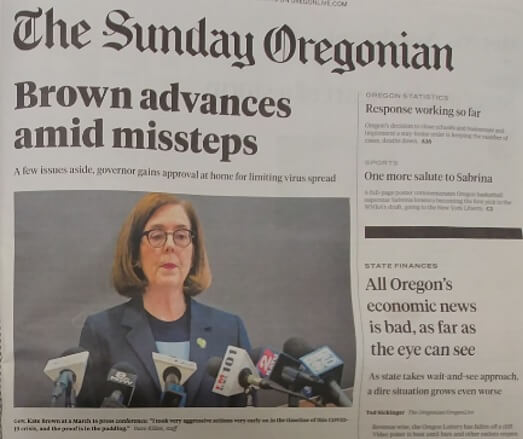 – When layoffs spiked Gov. Brown refused to change the administrative rules which had the effect of delaying jobless benefits by a week. Upon bipartisan objections by Oregon’s Congressional delegation brought a quick reversal. 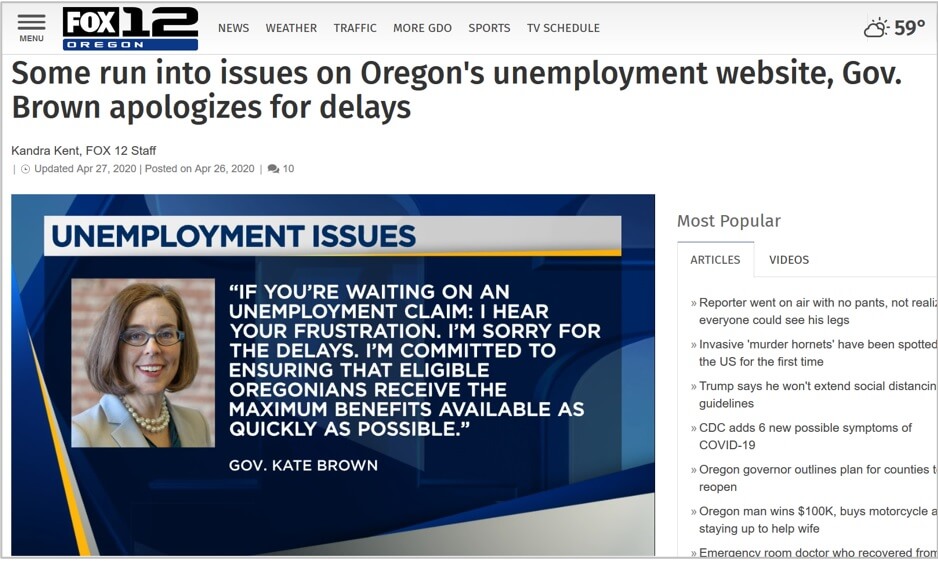 “Some run into issues on Oregon’s unemployment website, Gov. Brown apologizes for delays”
– Over 100,000 laid off Oregonians are not getting their unemployment claims processed properly because the employment department computers failed to fix their flaws from a 2015 audit. Some have been waiting for more than a month. This issue exploded last week as well. 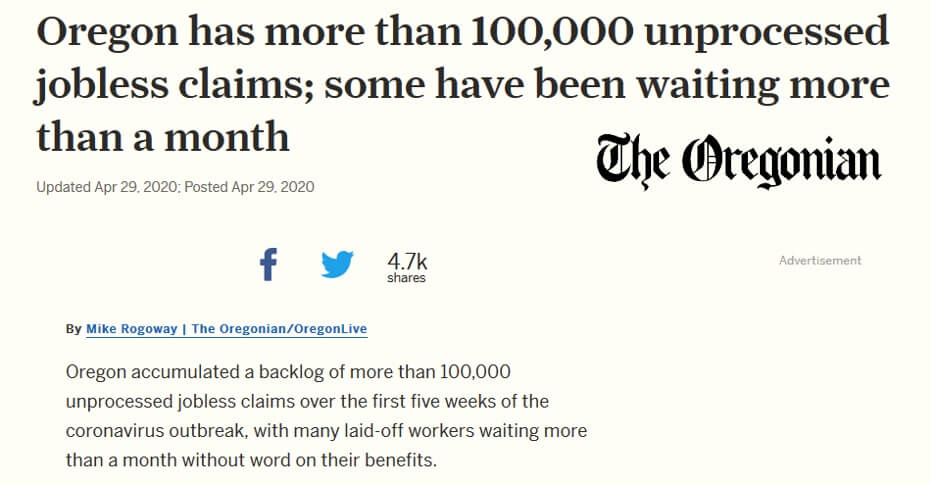 This week of missteps follows a pattern that people saw from previous weeks.  For instance;  There was widespread confusion on her office regarding enacting new limits to online charter public schools.  On testing capabilities, twice the Governor had to backtrack on public statements.

The Taxpayer Association of Oregon understands that we are in uncharted and unprecedented times.  We give the Governor incredible room to make mistakes or change course as any Governor would do.  Instead of just criticism we offer some helpful tips to avoid future confusion and chaos:

(a) Involve other Legislative leaders (especially bipartisan) and business leaders in your decision. (b) Allow flexibility with local governments and others to work out solutions (c) If in doubt do not over-regulate (as was done with charter schools and business tax), (d) allow more government transparency and (e) beware of the trap to over-promise which entices us all.

If you have a tip for the Governor or a criticism of what is not working, please reply in this blog, on Facebook or email us your ideas at [email protected]
.

— 35-plus straight days of virus/shutdown reporting by the Taxpayer Association of Oregon on this website.