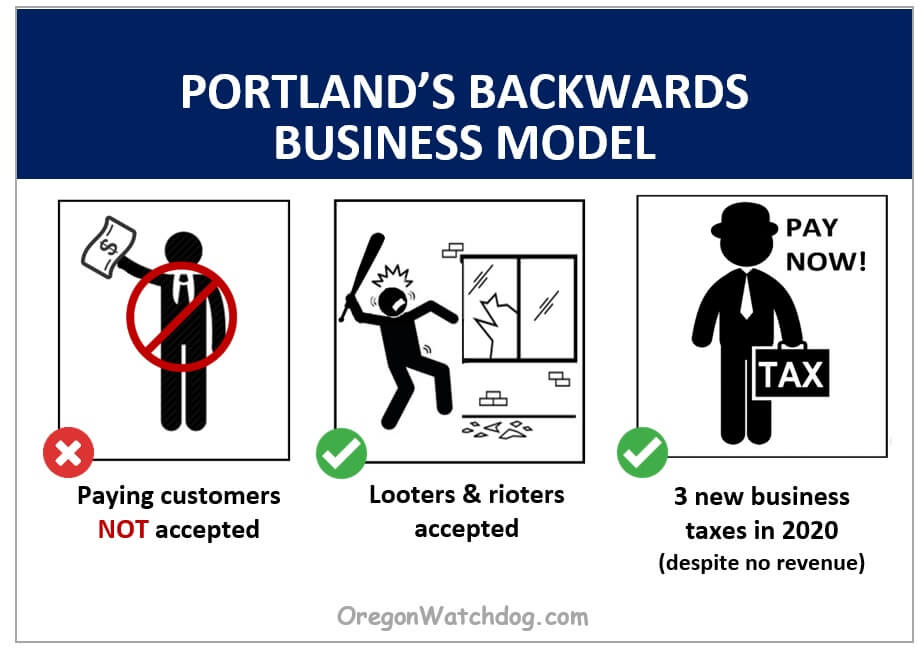 Portland has been closed longer than most places in America. As we speak, Portland and Multnomah County businesses are still closed as they enter into the fourth calendar month of being closed due to the shutdown while every other county in Oregon has re-opened into phase 1. Multnomah County is the last county to open (expected mid-June) in a state that is among the last states to open compared to other states.  A state that has been in the bottom five of virus death states per-capita and among the best reduction states in the past week.  That should be a cause to open up earlier.

While businesses are closed, they have endured four straight nights of rioting and looting. It is almost an annual event of watching liberal extremists and Antifa destroy downtown Portland with little pushback from law enforcement. If it is not the rioters it is the homeless explosion in Portland. The homeless have been allowed to trespass on private property and violate everyday laws ordinary citizens have to live by. In the past, nearly half of all crimes committed in Portland were committed by homeless. Small business has been hit hard by this lawlessness.

At the same time, Portland businesses are experiencing their third tax increase in 2020. First it was the Corporate Activities Tax (CAT Tax, also known as Gross Reciepts Tax) which Portland lawmakers passed last year and refused to delay its implementation this year because a worldwide pandemic and global economic hit is just not significant enough to extend a little mercy to small businesses that are being pummeled. Secondly, Portland area politicians promoted the passage of a brand new $250 million income tax and business tax (Metro 26-201) on the May ballot. Thirdly, Multnomah County increased the Business Income Tax by nearly 30% in 2020. That is three new taxes being approved or enacted in 2020 while Portland small business has been in its forth month of shutdown.