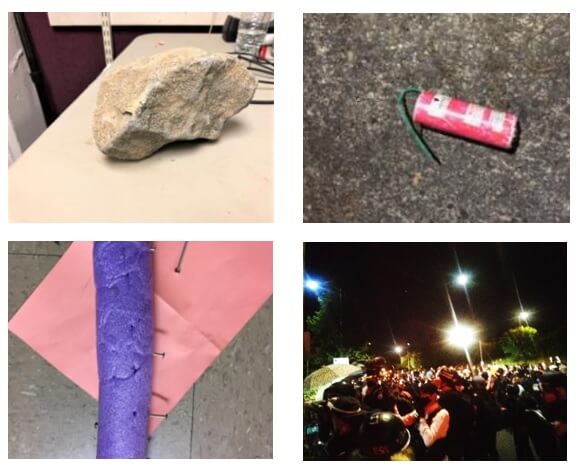 I drove by the Portland Sheriff’s Office around 9:30pm on Friday night and saw no activity. I came back fifteen minutes later and saw a flash mob of several hundred masked people who blocked off the entire street and began diverting traffic. The crowd quickly grew to a thousand. Fifteen minutes is all it takes for an area to fill with an unruly crowd without warning.

The police loudspeaker came on early and declared the crowd an unlawful assembly and ordered people to leave.

The crowd began throwing objects at police, camping on people’s lawns, taking down part of a barricade and yelling chants such as “No good cop in racist USA” and “How do you spell Nazi, PPD.” One bullhorn yelled “You are all murderers, rapists and thieves on six figure salaries.”

A minor explosive went off at the corner of the police station. Protestors yelled and argued among themselves on whether it was a good idea.

The police loudspeaker announced that people were throwing rocks at police and using lasers against officers. It warned that lasers could causes permanent injury for which the crowd responded with laughter and jeers.

For nearly four hours during the street takeover it seemed the police loudspeaker came on at least a dozen times to ask people to stop throwing objects at police, stop using lasers and to leave the area. For the police (and neighbors) it was nearly four hours of constant abuse and recklessness that went right into the midnight hours.

– The police were amazingly restrained and patient.

– The police provided a dozen warnings over several hours.

When the police emerged from the station they came out in a line and began to walk into the crowd to move them and make targeted arrests.

Photo: Photo shows what threats Portland Police faced on that night which include large rocks being thrown or begin dislodged from their property, unexploded explosive (one did go off that night), and pool noodles filled with nails placed on the street to sabotage police vehicles.

Support our independent journalism and reporting on these riots!