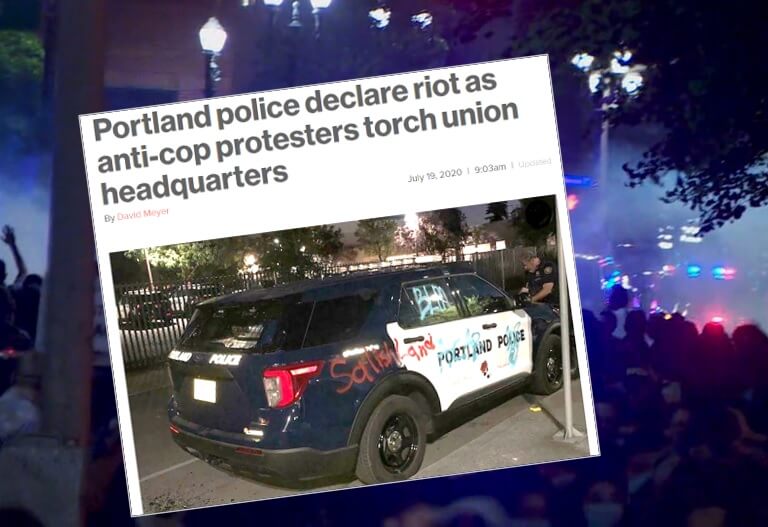 This week two police officers were severely wounded with lasers shot into their eyes. The damage may have cause permanent blindness in the eyes impacted.  Rioters tried to burn down the local Police Union headquarters. During the same week, Oregon officials have been claiming that the events have been peaceful protesting. Below is a description of what occurred this week from the Department of Homeland Security:

After repeated attacks from rioters, the plywood covering doors at the front of the courthouse began to buckle. A group of rioters also vandalized the south entrance to the courthouse with spray paint.

In response to the rioters’ assault, federal officers were forced to leave the building in order to repel the mob. When they did so, they were immediately assaulted with lasers and a variety of other objects designed to inflict harm.

Crowd control measures were deployed to try and redirect the large amount of people in the courthouse vicinity. Rioters responded by using cars to block movement on the street.

Around midnight rioters attempted to set the courthouse on fire, as they have done numerous times before. They also threw smoke bombs into the flames causing the interior of the courthouse to fill with smoke. In response, a team of federal officers was forced to leave the building, taking one individual into custody. When they did, a rioter threw a bag filled with hard objects at officers.

Around 12:40 a.m. local time violent extremists attempted to set trash bags on fire in the vicinity of the courthouse. They then then began using old fencing and road blocks as a barrier at the front door and fired commercial grade fireworks at federal forces. Two Molotov cocktails were also thrown near the courthouse.

At 1:39 a.m. local time, rioters ripped plywood off the front of the Courthouse and were able to expose the glass underneath. One rioter immediately started to break the glass under the cover of yet another laser attack from the mob.

Later, rioters were able to tear down an entire panel of plywood protecting the building and proceeded to use part of the city’s abandoned fence from the park to attempt to block federal officers from exiting the building. When officers left the building in response, rioters responded by firing commercial grade fireworks at the officers.

Rioters also destroyed a camera outside of the Edith Green Federal building, rendering it inoperable.