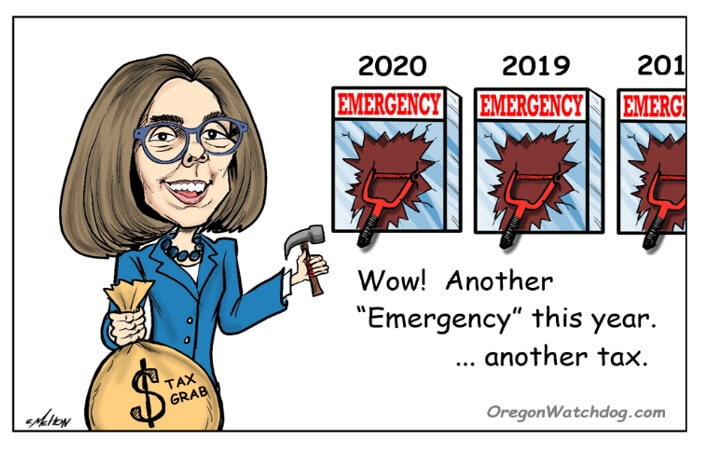 Two days after declaring a state of emergency over the coronavirus, Gov. Kate Brown then declared a climate emergency. Bypassing the elected Legislature, Governor Brown enacted a wide-sweeping Carbon Tax through an Executive Order (#20-24). This order directed 19 different government departments to implement portions of a failed Carbon Tax plan. Her order raises gas prices by forcing gas stations to serve a more expensive low-carbon blend which drives up gas prices for consumers. Her order raises housing costs with new regulations on fluorescent lights, computers, faucets, shower heads, washers, dryers, water heaters, steam cookers, ventilating fans, and more. Not a single vote was taken for these rules to go into effect.

In 2019 and 2018, tax bills were labeled with (fake) emergency clauses which blocked citizens from enacting a referendum petition to stop the tax. Politicians have been passing taxes during the super-short 35-day Special Sessions (2020, 2018) where advanced public notices and public hearings are severely limited compared to Regular Legislative Sessions.

COVID-19 decisions made in secret

During the COVID-19 crisis, Brown hid from the public and blocked media access to critical pieces of virus data (number of nursing homes deaths, age of patient deaths, hospital bed availability, major workplace outbreaks) that could have saved lives and allowed people to accurately identify and avoid the risks.

The Employment Department’s disastrous system crash, stranding 200,000 jobless claims, was made public only under pressure of a legislative oversight hearing. The public trusted Gov. Brown with broad emergency powers in order to save lives, not to save political reputations by hiding unpleasant facts from the public.

With just one week’s notice, state lawmakers cited COVID-19 as the reason for a closed-door special session of the Legislature and forbid the public from effectively watching what was happening. Capitol staff were not in the building either, so there was no one there to answer lawmakers’ phones. The public was basically cut-off from what the politicians were doing.

Citizens were asked to comment by phone on dozens of surprise draft bills with no official explanations of what the measures would do or cost. Because of limitations imposed by the coronavirus pandemic, our lawmakers should have increased transparency and openness in other ways. Instead, they abused the process by ramming a brand-new cell-phone tax (SB 1603) down people’s throats.

The politicians said they needed the $5 million to pay for rural broadband—but kept secret the $67 million the federal government just awarded Oregon for the exact same project.

Passing taxes in the dark is a great abuse of power.

Sneaking a tax during a crisis

The week before Oregon declared a virus State of Emergency, Oregon’s METRO regional government voted on the last legal day possible to place a quarter billion dollar tax on the May primary ballot so taxpayers would have the least amount of time (roughly sixty days) to read, examine, or campaign against it. METRO kept voters in the dark on critical details (how the money would be spent, who would collect it, etc.) until later in the campaign.