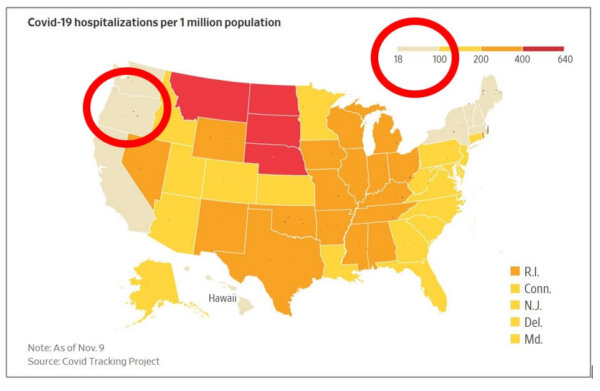 According to the COVID Tracking Report as reported in the Wall Street Journal this week, Oregon is in the best 10 hospitalization states as measured by hospitalizations per one million residents.   During the same week The Oregonian reports that new hospitalizations are rising to a new high and that we are at crisis level.   The hospitalizations and new cases have caused the Governor to enact one of the strictest lockdowns in the country.

– Is Oregon in a hospitalization crisis state better, worse or on average compared to other states?

– Is the hospitalization data tied to other more complex situations such as Oregon not having enough hospital spaces compared to other states — which if true, should be prompting us to ask more questions on why not?  This is an important question to solve a potential long-term problem.

– What is the Oregon data on the origins of these new hospitalization cases?

By asking these questions, we are not criticizing the state’s recent steps to reduce the spread or the need for action, but rather seeking public input to better understand the crisis, its causes and the solutions.