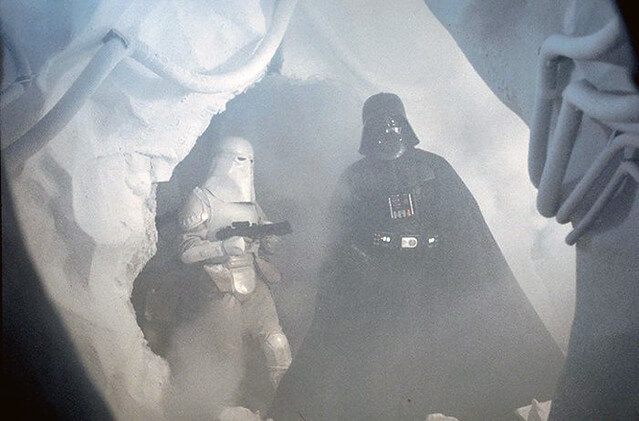 Good science fiction isn’t about the robots or the laser guns. Good science fiction is about us. It paints a canvas with an appearance of removal from our world, but the role of the genre is to remove our prejudices about the real world around us to test the assumptions behind our beliefs, much like the Original Position in John Rawls’s 1971 work A Theory of Justice.

So let’s use Star Wars to better understand how Adolph Hitler was evil, to get a better grasp of what that even means. Imagine if the title of this article were instead my asking the question: “Was Adolph Hilter evil? People might accuse me of being a Neo-Nazi just for asking the question. With good science fiction, we can explore the concept of evil without the distractions of social convention.

Is Star Wars good science fiction? It used to be before Disney got ahold of it. The creative genius of George Lucas used advanced technology as the setting for a medieval romance.

Two decades later, he produced the prequels, a trilogy that explains how Anakin Skywalker became Darth Vader. They ended up raising the question: was Darth Vader actually evil? I don’t mean this in the pedestrian sense of the 1983 movie Return of the Jedi, which gave Vader a moment of redemption, confirming his son’s belief that there was still good in him.

The prequels challenge the notion that Darth Vader was ever evil, that he willed The Bad and consciously opposed The Good. That is what we generally mean by “evil,” that someone intentionally wants bad things to happen. The original Star Wars trilogy offered a classical conception of good and evil. Lucas then offered a second trilogy with a more modern perspective, paying homage to Friederich Nietzche’s 1886 Jenseits von Gut und Böse: Vorspiel einer Philosophie der Zukunft, commonly called Beyond Good and Evil in English. It was Nietzche that first argued no one wills The Bad.

“I can’t believe there is still slavery in the galaxy. The Republic’s anti-slavery laws are…”

Anakin Skywalker’s mother cuts her off: “The Republic doesn’t exist out here.”

Later in that scene, Anakin Skywalker, an innocent boy, says: “I had a dream I was a Jedi. I came back here and freed all the slaves.”

The second scene is found at the 47:50 mark of Episode II. Anakin Skywalker is now a Jedi apprentice and Padme Amidala is a senator. They are sitting in a field discussing politics. Amidala asks Skywalker:

Skywalker replies: “I like two or three, but I’m not really sure about one of them. I don’t think the system works.”

Amidala asks a follow-up question: “How would you have it work?”

Skywalker says: “We need a system where the politicians sit down and discuss the problem, agree what’s in the best interest of all the people, and then do it.”

Amidala interjects: “That’s exactly what we do! The trouble is that people don’t always agree.”

“Well, then they should be made to.” Skywalker says.

“By whom? Who is going to make them?” She asks.

“But someone” Amidala presses.

“Sounds an awful lot like a dictatorship to me” concludes Amidala.

“Well, if it works,” concludes Skywalker.

The next scene is found at the 1:26:25 mark of Episode II, the funeral of Skywalker’s mother. Why is she dead? The immediate answer to that question is that she was captured and tortured by Tusken raiders. But there was a more fundamental cause. Skywalker’s mother had been a slave, forced to live in danger of being captured by these sand people. What does Skywalker say? There are many things he could possibly say. When confronted with such a tragedy, some people question their religious faith. So Skywalker could have said, “there is no God.” Or he could have embraced a happy notion of the afterlife like his mother’s owner did. But what Skywalker actually says is:

“I will never let this happen again.”

The final scene is found at the 34:47 mark of Episode III. Obi-wan Kenobe says, regarding ominous political developments in the Clone Wars:

“The Senate is expected to vote more executive powers to the Chancellor today.”

Skywalker replies: “Well that can only mean less deliberating and more action. Is that bad? It will make it easier for us to end this war.”

Skywalker’s political views lead him to embrace the Chancellor, who ends up being a Sith Lord and convinces Skywalker to come over to the dark side of the Force. Skywalker is renamed Darth Vader. There are other motivations in there, like a desire to acquire the power of the Force to prevent people from dying, but that’s not exactly a desire to do bad things either.

Darth Vader then can be seen as a person that uses his power to maintain law and order. If there is to be no slavery in the galaxy, then there needs to be, in his mind, a central political authority to enforce anti-slavery laws. Abraham Lincoln broke some eggs too to make an omelet out of preserving our republic. Darth Vader was trying to preserve the union.

What about the Death Star? Darth Vader would later employ this powerful weapon that can destroy planets. That is the intentional targeting of civilians, which is inherently evil, right? The Death Star looks like an apt doppelgänger for nuclear weapons. When the United States dropped atomic bombs on two Japanese cities, we were intentionally targeting civilians too. Did that make Harry Truman evil? The American Commander-in-Chief thought he was bringing a deadly war to an end, saving lives. Given the complexity to Darth Vader’s character that George Lucas added in the prequels, it seems this Sci-Fi caricature of evil was destroying planets with a similar logic all along. Neither Truman nor Vader willed The Bad.

So what about Adolph Hitler, Joseph Stalin, or Pol Pot? Did they will the Bad? Perhaps they didn’t. These historical figures brought great suffering yet also had grand ideological schemes about how to move humanity forward to a better tomorrow. Perhaps they just willed in error. We can look back in history and see such worldviews were a mistake. The public policy totalitarian dictators pursued led to more costs than benefits. This is less a question of moral character than personal wisdom.

But these three men committed genocide. They killed people on a mass scale. Surely there is some moral failing in such atrocities right? If the basis of your morality defines killing as good, then why would someone think they are intentionally willing The Bad? How many fine people of faith read the books of Deuteronomy and Joshua and fail to see evil in Joshua’s genocide? Check out verses 17 and 18 in Deuteronomy chapter 20. After explaining that they are free to enslave people, God tells the Israelites that is not the case of some other people who instead should be completely exterminated:

To spare a baby Canaanite’s life is a sin in this context. To kill a Jebusite toddler is The Good, according to the Bible. Is this genocide? Yes, it is. Is it wrong? People who use the Bible as the basis for their understanding of right and wrong don’t read these verses and see evil.

Maybe they are right. These killings were justified. Maybe they are wrong. Genocide is never justified, even when you think God is telling you to kill someone. Ultimately it’s just a question of whether or not someone has a correct understanding of The Good.

So rather than rejecting the notion of evil, Nietzche puts heinousness in a proper place. It’s not a function of malicious intent. Evil is a function of human error. And the villains we denounce as monsters are actually just humans, more like us than we often care to realize.

Darth Vader was mistaken, but not wicked. He caused more harm than good in the pursuit of what he thought was helping people. The same was true of Adolph Hitler. And if that is the case for even the likes of Vader and Hitler, then people who voted for Joe Biden should understand the same is true for Donald Trump as well. Our President does not will The Bad. And people who voted for Trump should be able to recognize that President-Elect Biden doesn’t will The Bad either.

Let George Lucas and Friedrich Nietzche give you the insight to avoid demonizing people on the other side of our political divide and instead focus on where they are mistaken. If we were to do that, we might develop an intellectual humility that realizes sometimes we too make mistakes.

This is the third post in a series on how the history of National Socialism can help us understand American politics of today. The first was the introduction: What Antifa Got Wrong. The second was Why Not Joseph Stalin or Pol Pot?