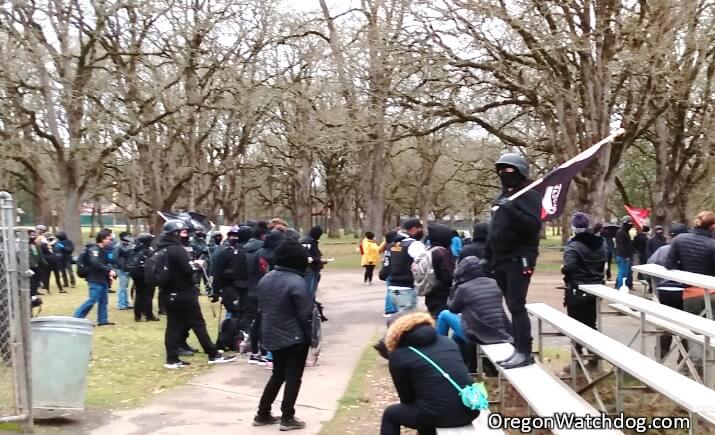 On New Year’s Day, several leftist groups (anarchists, Antifa, Blacks Lives Matter, indigenous rights) met in Salem’s Bush park.  Here are some highlights of what was said by the guest speakers at this publicly advertised event:

• One speaker declared that 2020 was about “No Justice” and 2021 will be about “No Peace”. He said to expect even greater disruptions in the new year. With hundreds of arson attacks, vandalized businesses, attacks on police and innocent civilians and over 140 days of protests last year, this threat of a more violent 2021 would be terrible.  The New Year’s Eve riot, the night before, was exceptionally large and destructive and gained national attention.  He said to expect more Red House Autonomous Zone protests where anarchists took over a foreclosed house and 5-city city streets.  (Read our article about the dangers of the Red House protest here).  The speaker warned police not to evict ANYONE in 2021.

• When a few police officers came near the rally, the crowd went into battle mode. Some people immediately began picking up rocks.  A few, began to stalk the officers wherever they went while most hurled insults at them. It was rumored that the officers were looking for a downed drone.

• People with the words “PRESS” attached to their armored vests with one appearing to be carrying knife and a gun. Either The Oregonian and Willamette Week have decided to go commando or the commandos have decided to go journalistic.

• They said they are fighting for their very survival, whereas their counter-protesters at the anti-lockdown rally at the State Capitol nearby were labelled as just fighting only to preserve “white privilege”.

• Understanding this rally requires some complexity. Normally daytime rallies attract a more mixed and moderate crowd whereas the nighttime protests lean more anarchists and violent. Daytime protests lean more towards Black Lives Matters messaging whereas nighttime protest lean more cop bashing. This is why some local BLM leaders and NAACP began to distance themselves from the nighttime rallies early on last year. This rally was more diverse than you can imagine. So much that some speakers declared upfront that they were either “reformists” or “abolitionists” (meaning to reform prisons/police or abolish them).  Speakers openly mentioned that they disagreed with each other.  Some messages were overtly violent while others were pointedly non-violent. One cannot truly understand the diverse rally without comprehending this exotic combination of different beliefs.

• The subject of black self-empowerment came up which has been a familiar topic in some of the daytime rallies. The speaker effectively said “We do not need government. We can take care of ourselves. We feed ourselves. We have our own medics. We can protect ourselves. We know how to use the Second Amendment.” Sometimes at rallies this self-empowerment subject means anarchism, other times it has been explained by such speakers as allowing people to have greater control over their schools, their businesses, their taxes and their right to defend themselves.  Conservatives and libertarians can easily find common ground on this subject and should. (For more of this topic read our article on ideas conservatives may agree with from Seattle Autonomous Zone)

• At one point hecklers from afar yelled at the group. The rally speaker who was interrupted by the hecklers said they were juvenile and implored them to “come and just listen for a moment”. This idea of listening was a familiar topic of the day and has been a repeated theme at daytime rallies. Unlike most political rallies, several guest speakers invited the audience to reach out to them personally afterwards and share their ideas and solutions. Once again, conservatives and libertarians should not pass up on a chance on such public invitations to share their ideas and solutions and be a part of the debate over racial justice and the role of government.