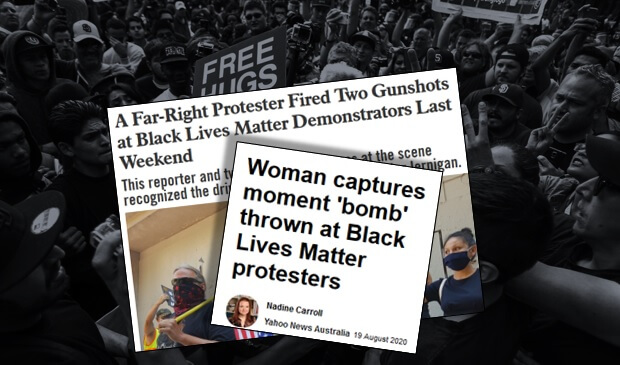 We have issued dozens of articles and reports on the violent protesting of Antifa, anarchist, and those more violent elements acting in the name of Black Lives Matter. They are increasing their violence as the protests continue unabated.

Counter protestors (back-the-blue, right leaning, anti-Antifa, etc.) have recently entered the fray and some of them have made headlines for all the wrong reasons.

– Two pipe bombs were thrown into a BLM event at Laurelhurst Park this month.

– Yesterday, a man pulled a firearm on a BLM protester.

– A man wielding a baseball bat entered several businesses in SE Portland, yelling and tearing down BLM posters. (As if small businesses were not suffering enough during this season. Remember, some put BLM signs on their business to keep from being looted, and now having the same sign makes them a target. Small businesses simply can’t win.)

What a miserable week it has been!!!!

This is a new alarming trend.

Just as the local NAACP had to condemn the violence within their own BLM protests which have spiraled out control, so we too, as an Oregon fiscal conservative and liberty-based organization condemn any use violence as a form of protest.

No firearms as tools of harassment.

I can only imagine what the police are thinking as they see people committing crimes in the name of supporting the police.

Second Amendment defenders recoil when people abuse their right to posses a firearm because they know it causes the public to turn against the Second Amendment out of fear.

Since Gallup released the poll showing 81% of Blacks support current levels of police funding or greater, we know we have the wining heart-and-soul of America on our side.

We issue this statement in light of a changing America that faces unparalleled splintering into smaller and smaller affinity groups. What the public may not know is that there are now likely 10 times more political groups (right and left) in Oregon than a decade ago. This has been good and liberating, and at other times really bad — like when new political groups resort to extremism.  This has created a lot of confusion, lumping or causes, and mixed messages.  This is why we feel compelled to lend our voice towards non-violence, rebuke any conservatives/right-based groups engaging in violence, convince people in our own cause of the power of our peaceful peaceful protesting (which we recently did with great fanfare) and steer our own energy to genuine people power and results at the ballot box.