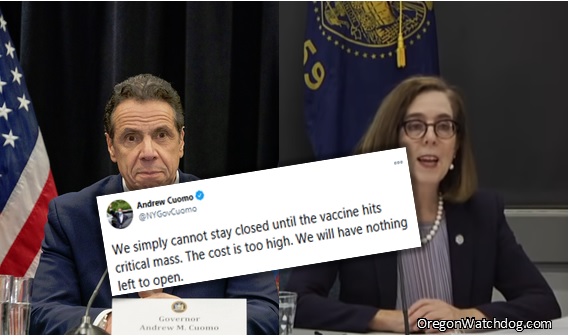 One of the nation’s most restrictive lockdown Governors in America, New York Andrew Cuomo, gave a State of the State Speech speech where he openly criticized the effects of His state’s current lockdown and emphasized the need to end it.

His Tweet read, “We simply cannot stay closed until the vaccine hits critical mass. The cost is too high. We will have nothing left to open. We must reopen the economy, but we must do it smartly and safely.”

His speech emphasized that we “must reopen the economy” and stated, “we are looking at months of shutdowns and the economic, mental and spiritual hardships they bring. We need to act now. If we don’t, dining will remain at levels too low for restaurants to survive, offices will remain empty, hurting the service business that depend on those office workers, theaters and sports venues will sit empty, people will remain out of work.”

Governor Cuomo clearly points out that his state has reached a point where the damage becomes unrepairable.  We feel we are at that point here in Oregon.

Oregon remains only among four lockdown states in the nation.

Oregon need to open up!