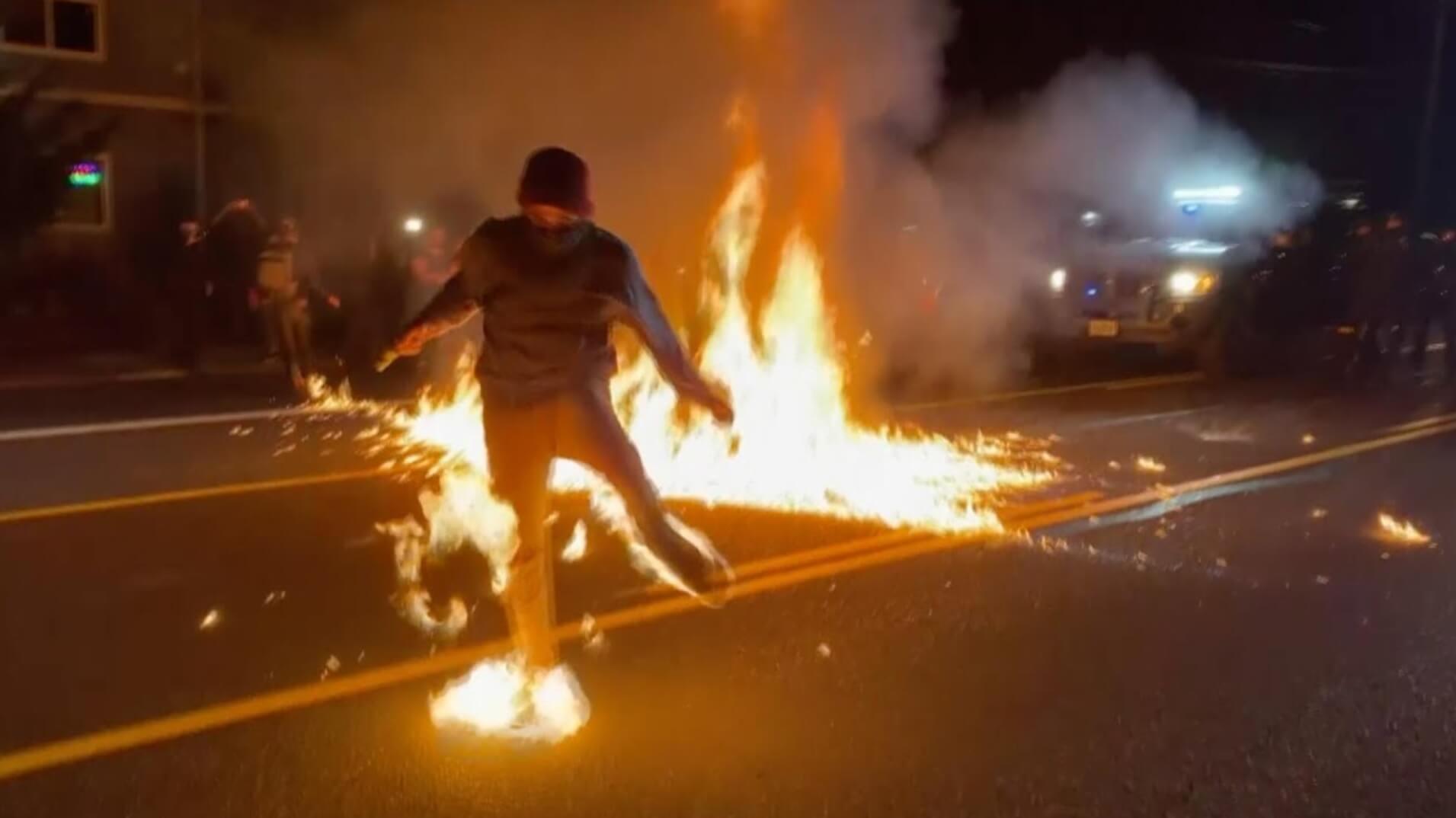 Oregon House Speaker Tina Kotek has introduced legislation (HB 3164 amendments) that would make it easier for protestors to disobey police officers in a riot — which in a way moves Oregon closer to legalizing rioting.

The idea stems from the House Speaker’s arrest of her Legislative Director at the 100th night Portland riot last September. The staffer was asked to leave a riot in progress, she refused and was arrested.

Here is what Oregon needs to know about what REALLY happened that night, as the Taxpayer Association of Oregon was there as a witness to the violence:

• Nearly 1,000 protesters gathered at Ventura park with the goal of marching to a small neighborhood police station that was previously attacked and hit with arson days prior.

• This crowd was so violent and dangerous that within a matter of minutes of the march beginning, people began to throw Molotov cocktails at police.

• These firebombs could have killed people. One of the Molotov’s caught the thrower on fire and the crowd was helpless to save the man. Two police officers put their lives at risk to run into the crowd to use fire extinguishers to rescue the man.

• I saw firsthand people pick up large stones to throw at police. Stones big enough to send you into a coma if it head your head.

(As stated, this was all withing the first 10 minutes of the protest march!!!!)

– For the next several hours, these 1,000 rioters hurled objects at police, stole people’s property, trespassed, vandalized business, bashed windows and even blocked four lanes of traffic. They marched through residential neighborhoods screaming at people who were sleeping and set an apartment dumpster on fire which could have easily burned down the apartment.

– When the House Speaker’s staffer was arrested around 11:30pm, the rioters had made their way back to the Ventura Park area. While police were desperately trying to clear the area, here is what I witnessed.

– Police used tear gas. A man picked up the canister and threw it back only to fall short and hit a girl in the face.  People were screaming for medical help — getting an ambulance to show up in a riot with blocked streets in nearly impossible.  Once again, police had to clear the riot area and street blockers to help save lives.

– Rioters blocked traffic. A truck accidentally almost hit a fully black-clad protestor standing in the middle of the street at night. That accident almost caused the rioters to surround the truck and pull the man out if it was not for the police running to the scene to stop it.  Where I was, a woman was trapped in her car, blocked by the rioters and no where to escape, she tearfully was on the verge of panic.

When police were asking people to leave a riot area (at the time of the staffer’s arrest), they were doing so to save people’s lives from injury and possible death. They were doing so after rioters already spent hours hurting people, destroying things, setting fires and throwing dangerous objects at police that had to potential to kill or main people.

Do you want police to save lives or not?

Rioters use the shield of crowds to hide their attacks on police. They throw firebombs, rocks and use lasers to blind officers. If you cannot disperse the crowd you cannot stop the violence.

The HB 3164 amendments make it harder for police to disperse a crowd.

At the 100th night protest, I specifically heard organizers by bullhorn telling the crowd to interfere with police if they were arresting someone. When the crowd is told to swarm officers as they arrest someone, you have a dangerous situation. The only way to arrest people in a riot is, once again, to clear the area where crimes are occurring. HB 3164 makes this harder.

Furthermore, the Legislature is looking at restricting the use of tear gas further, as to make it even more hard to clear a riot area. And, places like Portland cut their police budget so they have less officers to deal with riots. Oregon is dangerously moving towards legalizing and legitimatizing rioting.

When officers can’t clear the area, people will get hurt — deaths have already occurred at these riots.  Then people will sue the government for not stopping people from getting hurt.

Review the facts behind these riots.  The 100th night protest violence condemns the House Speaker’s staffer for not letting police clear the area to save lives.

All night long, police loudspeakers warned people that this was a riot and to immediately leave the area.  The police even instructed people which street to exit the riot.  The House staffer knew this, and yet remained in the riot area.

By the way, the violence continued beyond 11:30pm for several more house, making it a nearly seven hour night of violence and destruction.

Here is a map of the carnage that night of how many clashes with police and how many different neighborhoods were impacted in a single night.   That is a lot of destruction.