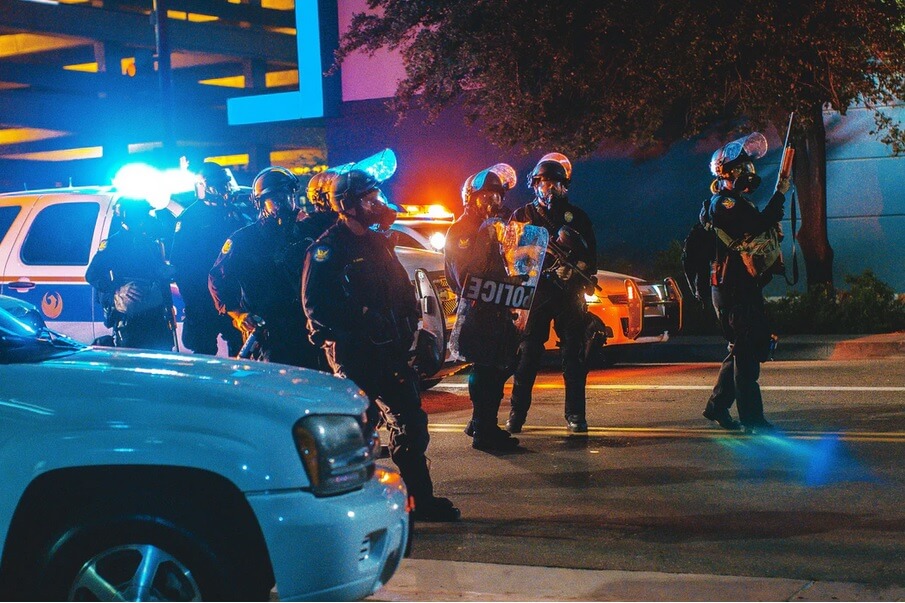 The Taxpayer Association has had on-site reporters at the Portland protests throughout the near-long riots and has noticed how the crowd has shared their heightened fears of kettling — being surrounded or corralled by police (where everyone is identified or arrested).   Amazingly, Portland Police just kettled 100 protesters last Thursday in a massive setback to the movement, causing the ACLU to challenge its justification.

At many of the Portland riots, protestors are strategically stationed at street corners with two-way radio as watchmen against police approaching from behind.   At other protests, you can witness men on motorcycles making routine perimeter circles for hours in what also appears to be lookouts for police.   The only faces we see of people rioting are those arrested which gives us an incomplete picture by showing us only the most radical and criminal within the group.  In reality, many of these rioters are very young, student age, who are in grave fear of ever being caught by Portland Police.  Many of these young people have come from far away for a chance to destroy things in public and not get caught.  Last Thursday, they just got caught in huge numbers.

The location of the protests has made kettling challenging.  For instance, the often rioted area, the Portland Federal Courthouse is next to two park blocks which provides an expansive area for people to escape.  The Portland protests at neighborhood police stations are near street corners where you have four street exits to escape.  Also, at these residential neighborhood protests, rioters in a panic can simply escape by running through people’s backyards.   We have seen this happen when police advance to clear a riot. Watching rioters scaling people’s backyard fences in the middle of the night screaming is just another aspect of this disturbing phenomenon of rioting.

Last week’s protest took place in downtown’s Pearl District where a riot was underway with people overtaking city streets and destroying public property.   They had violently trashed the same area a week before.   This area made it easier to kettle because downtown buildings provided no way of escape once police began blocking off streets.  Of the 100 people identified, only 13 were arrested.

Police only kettle when there is a riot and after alerting people to leave.

It cannot be overstated what a setback the capturing of 100 protesters was last week.