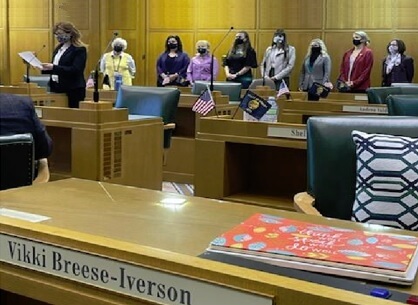 In October of 2017, more than a hundred women working in Oregon politics took a strong public stance against sexual harassment in state capitols, issuing a public letter that encouraged women to speak up when they have been harassed, bullied or dehumanized.

This is a timely message to revisit, now that Oregon’s House membership is majority female for the first time in our state’s history.

2019 was my first year in the Legislature and none of the women serving in the House Republican Caucus served in 2017.

And so, we stand today to associate ourselves with this letter, which reads in part:

Recently, our colleagues in Sacramento accurately described the inappropriate sexual harassment that is still all too common in state capitols. Our friends in California said it well, so we will simply repeat it:

As women leaders in politics, in a state that postures itself as a leader in justice and equality, you might assume our experience has been different. It has not. Each of us has endured or witnessed or worked with someone who has experienced some form of dehumanizing behavior by someone with power in our workplaces. People in positions of power have made promises, or threats, about our jobs in exchange for our compliance, or our silence. They have leveraged their power and positions to treat us however they would like.

Having the courage to speak up is difficult. Our colleagues are correct in stating:

These degrading acts over time cause us to shrink back in our personal and professional lives. While advocating for the causes and clients in which we believe, and working to advance our careers, we must concurrently balance these activities with worry, fear or shame.

California, we join you in saying: enough.

Oregon has more women in political leadership than any other state, and that has made a positive difference. But it’s still not enough. As women working in the halls of our democratic institutions, we want to empower women to speak up without fear when they have been harassed, bullied, or dehumanized. We must all strive to create a culture where it is expected that people (both men and women) will speak up when it is happening in front of them, and ensure that it is safe to report it when it happens in private. No more sweeping it under the rug, no more being made to feel like you should have done something to prevent it.

“The time has come for us to come together, to speak up and to share their stories. The time has come to listen and to act as strong allies by speaking out against harassment in all its forms.

If you see – or experience – inappropriate behavior, don’t sweep it under the rug. Speak up, speak loud, and know there is a community of people who will support you.”

Joining them today are:

We affirm that there is still a community of people who will support those who speak up. Women across the country said enough in 2017. In 2021 we say again: enough.