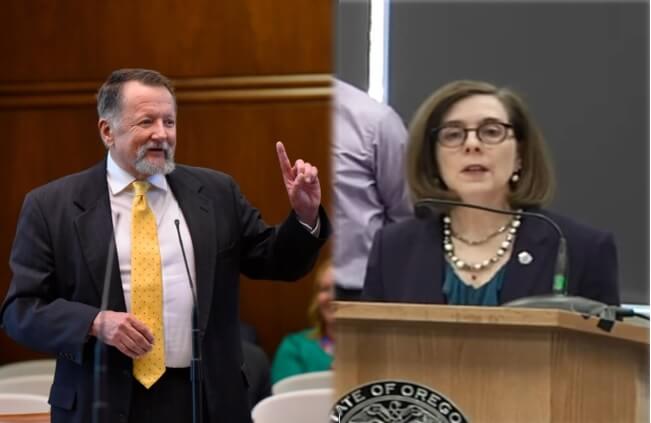 On Tuesday, the Governor again flexed her unchecked power by reimposing draconian, undemocratic lockdowns that threaten the livelihoods of tens of thousands of Oregonians.

In response, Senate Republicans today refused to fast-track the passing of Democrat legislation. As this session has shown, the Constitutional requirement that legislation be read in its entirety is an important tool to encourage bipartisan collaboration. Senate Republicans stand ready to work with Democrats to reform the Governor’s unchecked powers.

“We are not obligated to let the Governor railroad Oregonians without accountability and transparency,” Senate Republican Leader Fred Girod (R-Lyons) said. “Legislative Democrats have locked people out of their Capitol building, and are actively participating in the Governors’ efforts to lock working Oregonians out of their jobs. With vaccinations ramping up, we should focus on lifting Oregonians up, not putting them out of work.”

The Governor is moving to force thousands of Oregonians out of jobs while other states and the CDC relax pandemic restrictions. County leaders across the state and political spectrum have signed a letter to the Governor urging her to reconsider her misguided restrictions. Senate Republicans stand in solidarity with them.

Legislatures across the country, from Texas to Michigan to New York, have passed bipartisan legislation to restore balance to government decision-making. Yet Democrats in Oregon have refused to consider a slate of Republican proposals to protect Oregonians from concentrated political power.

“Democrat’s refusal to take seriously their role as a co-equal branch of government is actively harming Oregonians,” Girod continued. “The Democrats are aiding and abetting the abuse against working Oregonians because it gives them more power. No one-party, no one person should have this much power. Republicans are ready to reestablish principles of checks and balances and uphold values of transparency in the legislative process to protect lives and livelihoods.”

Republican bills like SB 531, 532, and 533 would allow the Legislature, as Oregonian’s elected representatives, to check the Governor’s powers in emergencies.

“The Governor’s emergency powers kept kids locked out of the classroom for over a year,” Girod added. “They have led to countless Oregonians losing their livelihoods. Legislative Democrats have shown no courage to stand against the Governor’s overreach. They have failed to stand up for working families.”

The Governor’s logic is mind-numbingly inconsistent and targets small businesses. Costco and Walmart are allowed to have thousands of customers per day and pad their balance sheets. According to OHA data, current outbreaks in Oregon are not driven by restaurants or gyms. Yet those workers are being told they aren’t essential and will be forced out of jobs.

To date, there have been no superspreader events traced to gyms or restaurants in Oregon. Yet, over 1,000 restaurants and bars have permanently closed due to the Governor’s unchecked power. That is thousands of Oregonians with no job to return to.

“Democrats will tell you they are the party of the working class, but when given the opportunity, they have refused to stand up for their livelihoods. Republicans are standing shoulder to shoulder with working Oregonians,” Girod said.