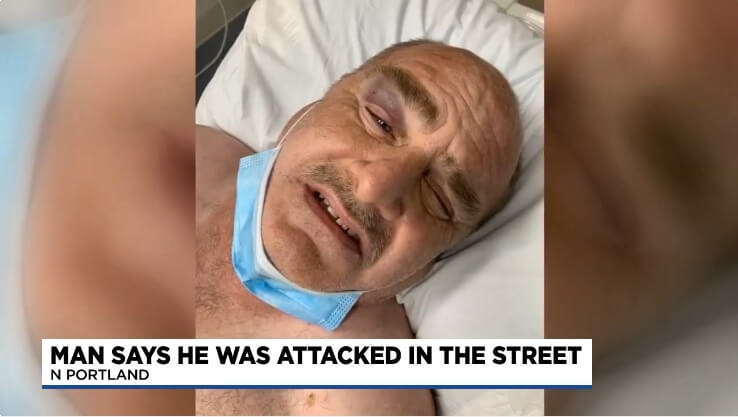 The news of the savage attack on Portland resident, Joe Hall, by Leftists Portland anarchist protesters has made national news in the NY Post.

KPTV-TV interviewed the man (video clip of his story). Joe Hall said to KPTV TV “[I have a] partially collapsed left lung, two lower vertebrae fractured,” Hall said, on top of five broken ribs, a broken collar bone and head trauma.Hall spoke to FOX 12 from his Legacy Emanuel hospital bed. He says he doesn’t regret anything he did Thursday afternoon…”

The Oregonian recounts the story,

“He said he then noticed the moped following his truck and a man screaming on a handheld radio to stop his truck. When he reached Michigan Avenue, Hall said another vehicle blocked his path “and all of a sudden I have three or four people around me” with what to him looked like AR-15s and AK-47s.

Hall said he grabbed hold of a non-lethal handgun that can shoot hard pellets to try to get the people to clear the way and hadn’t realized there was a march until people circled his truck. He said he heard a woman outside on a megaphone yelling at the crowd to let him go, but the people continued to block his truck and call him a “Nazi.”
“They’re screaming and yelling at me, claiming I was out there trying to run people over. That’s when I discovered a march was going on,” he said. ”I was trapped. A vehicle in front of me trapped me in. I couldn’t go forward or around.”
Advertisement
” width=”100%” height=”1″ frameborder=”0″>

Hall is seen on video standing outside the driver’s seat of his red pickup, his door open, holding the firearm, while a man standing in the street points a rifle at him at North Alberta Street and Michigan Avenue. Hall can be heard yelling: “You have about five seconds to lower that weapon,” as others respond that his truck is a weapon. Hall said he stepped out of his pickup and someone snatched the keys from the truck. When he went around to the back of the truck, he said several people in the crowd remained hostile and pointed handguns and rifles at him.

He said he then pulled his .38-caliber pistol from his pants and headed into the fray…People then tackled, punched, and kicked him, according to Hall and the videos.”