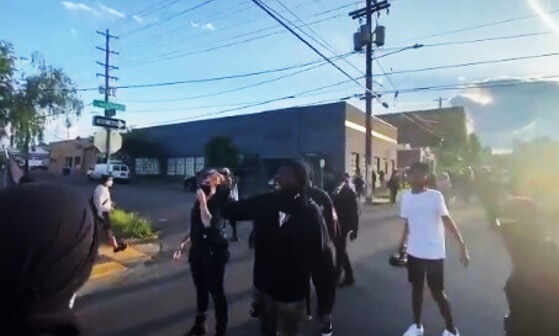 KPTV reports that a March honoring the near-anniversary of the death of George Floyd was held in Portland.  They noted at the end “A few people within the group set off fireworks during the march, but Rose City Justice asked them to leave.” The BLM marchers also got mad at when the anarchists began vandalizing the Multnomah County Government building.

You can see BLM protesters arguing against the anarchists.  People reported that BLM called these anarchists colonizers and exploiting blacks by using them as shields.

“So a group of bloc [anarchist] showed up 2 a lib march organized by [Rose City Justice, BLM]. the bloc [anarchist] got the energy going when the march first took place off w chants like “AK47 send the cops to piggy heave” & “loot the stores! Burn the prisons! Anarchy & Communism!”..During the march a firework went off and a dumpsters was about to be relocated. That’s when [Rose City Justice, BLM] & people from juice lost in on bloc [anarchist]. A group of armed men approached us and started pushing and yelling.”