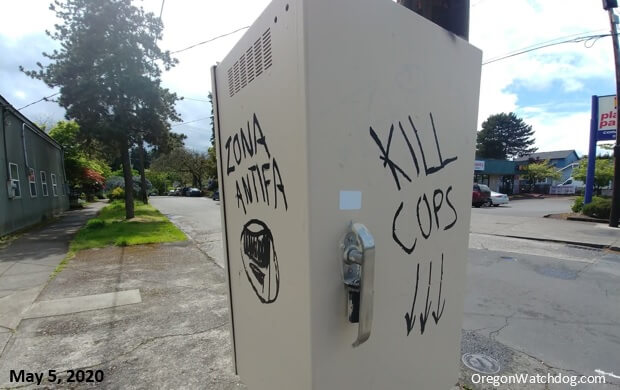 This photo, taken four weeks before the George Floyd incident by the Taxpayer Association, on May 5th (SE Portland’s 67th and Glisan) shows graffiti detailing that this area was an “Antifa zone” and to “Kill cops”.

Additionally the antifascist and anarchists symbols of the two flags and Iron Front 3 Arrows were also used and can be seen in the photo. 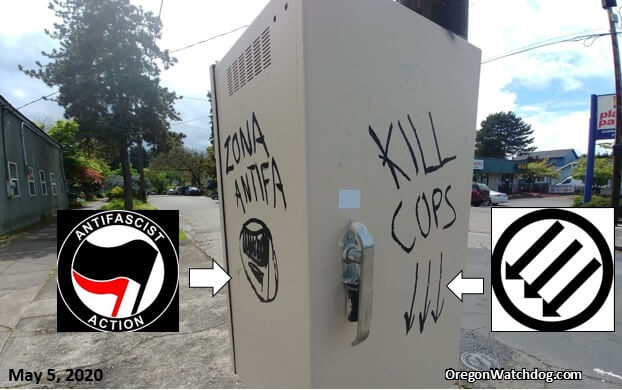 Their message of “Kill Cops”, promoted before George Floyd became one of the most common symbols of the Portland riots.  Overtime as marchers pressed the message of racial justice, the anarchists were pushing “kill cops” which became a message that was chanted, at times, more often than Black Lives Matter at the nighttime violent protests.

Here below is a sample of Taxpayer Association’s collection of the anarchist’s “Kill Cops” messages over the last 8 months of rioting — it was everywhere where anarchist rioted;

Former Oregon State Senator and Black leader Avel Gorldy said, “The misguided and miseducated anarchists reject civility and instead intentionally create mayhem through criminally destructive behavior, tearing up our city and this must stop. You are not helping. You are hurting Black people. We need peacemakers and peacekeepers.”

Former State Representative Margaret Carter said, ‘“But I don’t stand with you in seeking our city being torn apart,”

Former Trail Blazer Terry Porter said, “This is not what the Black Lives movement is about. It does not make me as a Black man any safer.”

These riots have avoided full criticism because they were masked as racial justice.  Now in the State Capitol politicians are debating several bills to handicap law enforcement from stopping violent riots (bans on tear gas, pepper balls, crowd control agents, arresting for disobeying officers in riot zone, etc.).   What they are doing is protecting violent lawless anarchists that have been imported from out-of-state.

Consider this anarchist, who came from out-of-state and was arrested for rioting TWICE in one day (notice the tattoo flags). 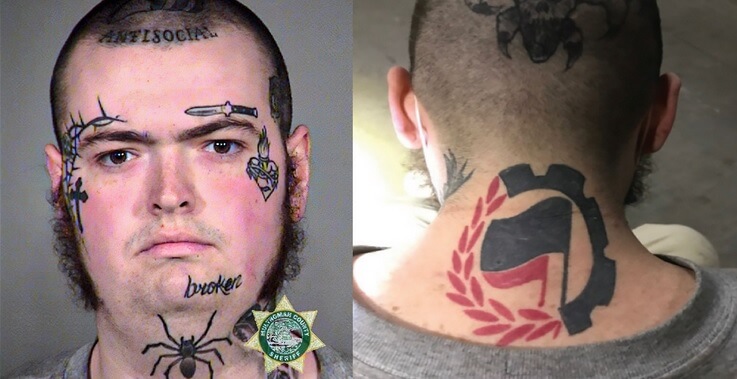 The anarchist have done unspeakable damage and violence in Oregon, we need to support law enforcement and their ability to arrest the rioters and bring the rioters to justice in hopes of restoring peace in our city.