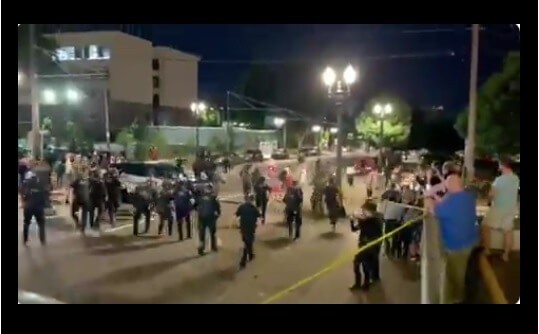 By Taxpayers Association of Oregon
OregonWatchdog.com
.
Police intervened on two men fighting, one carrying a weapon.  Police shot the man.  Soon afterwards a mob of anarchists arrived to protest.  The anarchists were reported to have tried to break into the crime scene, steal a baton from police and throw objects at the police.  It even made FoxNews. Here are some recaps.

PPB riot line move in & mace community members that have gathered outside the crime scene where a man was shot by PPB tonight. From my viewpoint, there was no escalation from the crowd that warranted this use of force. A few water bottles were thrown after they maced the crowd. pic.twitter.com/53iKxLLsLm

Crowd control munitions in use at active crime scene pic.twitter.com/m4k0INNjwI