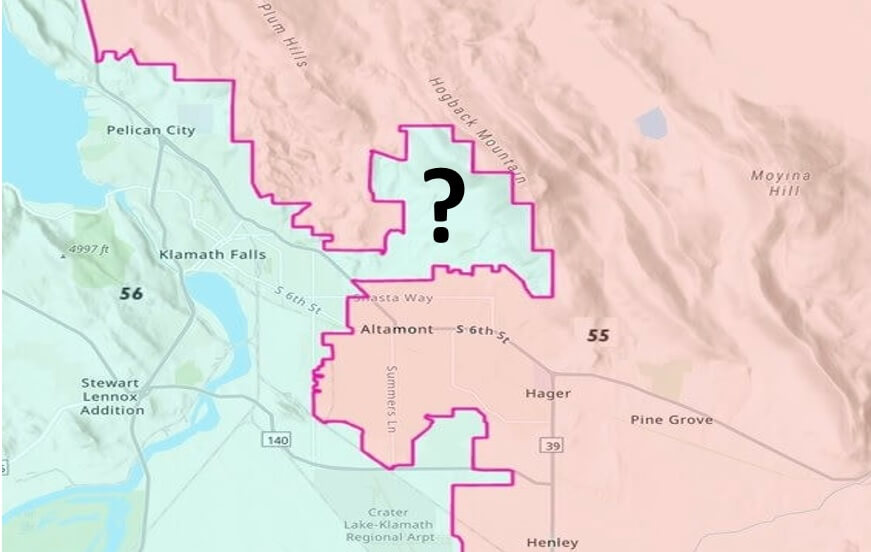 On Monday, September 20, 2021, the Legislature was called into a special session to redraw the district lines for State Representatives, State Senators and U.S Representatives. This constitutional requirement is to be done by the legislature every 10 years to account for a shift in population. The legislature had a week, until September 27th, to accomplish this task or the State District maps, for State Representatives and State Senator,s would become the duty of the Secretary of State and the Congressional District maps the duty of a 5- judge panel. With a super majority led by the Democrat party, both the new congressional and state district maps passed on the 27th and were signed by the Governor. 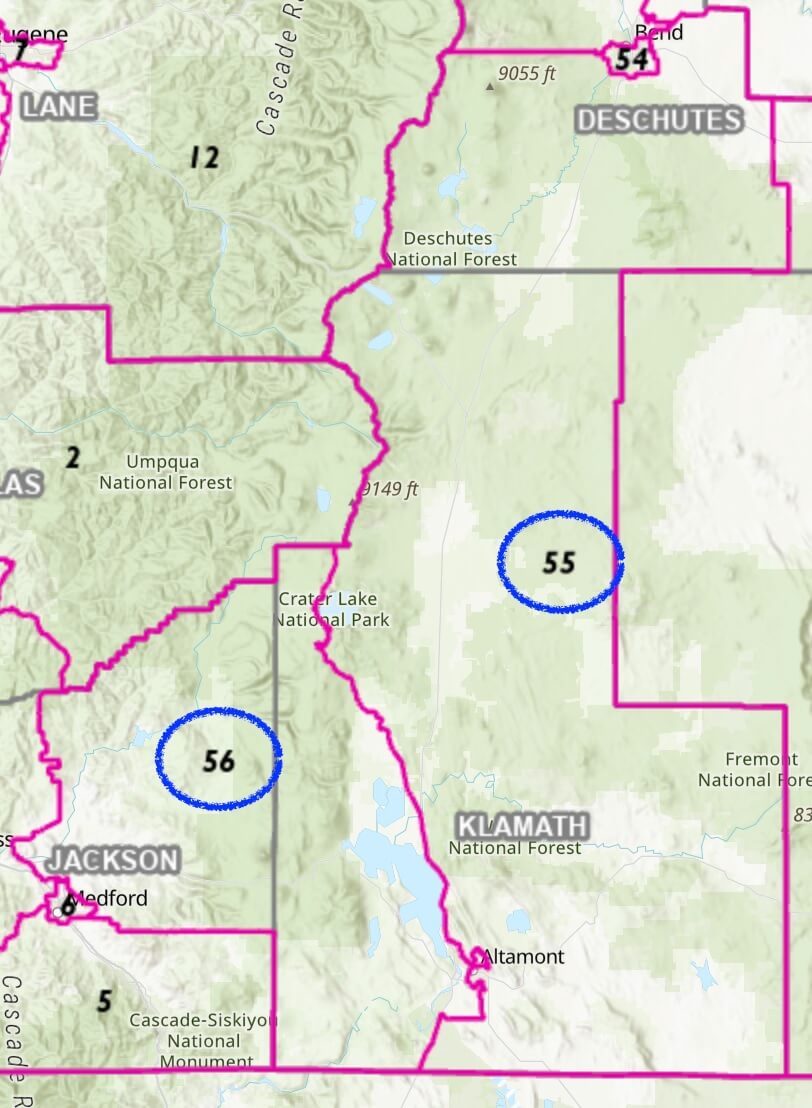 Not only did Democrats split Klamath County in two, they split the city of Klamath Falls in half. The lines meander in and out, in an inexplicable way — this is called gerrymandering. If you think that someone who had never been the Klamath County or Klamath Falls drew these lines for political gain, you would be right. A major part of redistricting is to ensure people of common interest remain in the same district. Splitting the city Klamath Falls in half violates this fundamental principle. 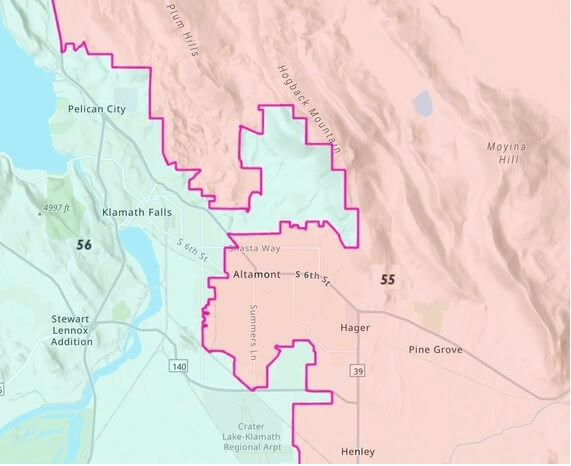 While people in Klamath Falls may have different views, we are all part of the same community: we share the same churches, restaurants, theaters, stores and more. To say we are not a community of common interest is to ignore this important redistricting principle. The artificial dividing of Klamath Falls in two and splitting Klamath County in half is confusing, divisive and unhelpful in solving issues at the state level. 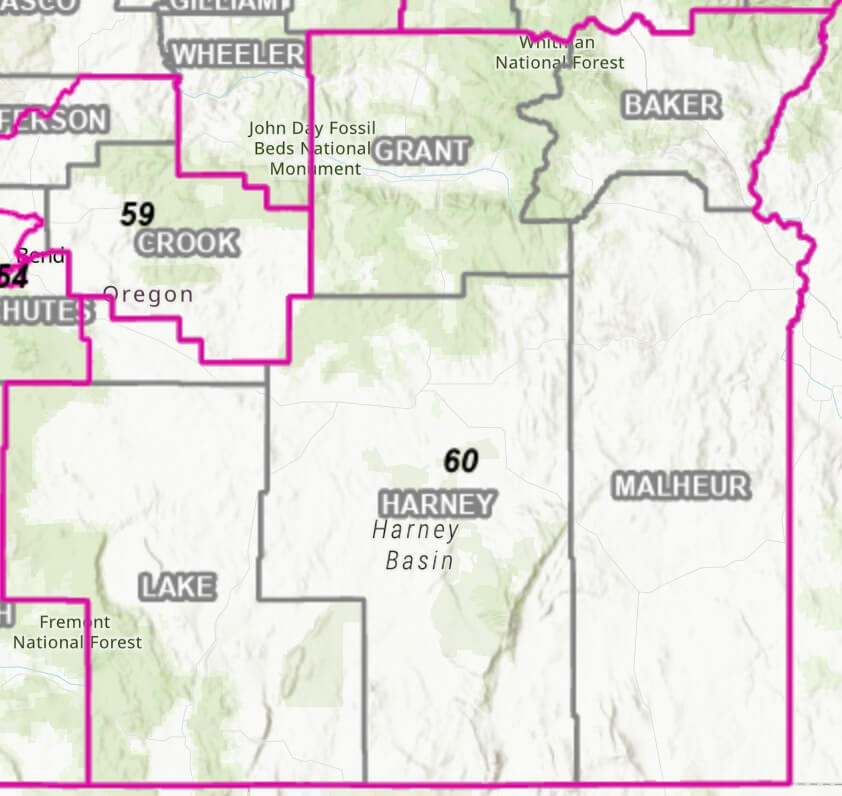 Currently, Lake county is split three ways, which has made finding solutions at the state level more difficult than it needs to be. However, the new district lines put Lake County all back together again into one district: House District 60. House District 60 is made up of 5 counties — all kept whole: Lake, Harney, Malheur, Grant and Baker. This is a win for Lake County residents, however, it remains a loss for Klamath County since the State Democrats did not keep us united.

It could’ve been worse

One of the original maps proposed by Democrats divided Klamath County 3 ways. The new maps are not good, but slightly better than the original proposal. Moreover, if the legislature had failed to meet its deadline of passing new legislative district maps, the Secretary of State would have drawn the lines. This would likely have been a far worse result of divisive lines.

There is so much more to say about redistricting — how the Speaker of the House broke her word, how Republicans were mistreated and ignored, why it is impossible to take the politics out of a political process, whether someone will sue to correct the gerrymandering all over the state — but for now I will conclude with this final comment.

It is clear to me that politicians should not draw these district lines. There is an inherent self-interest — to protect one’s district and benefit one’s party — that supersedes any other concerns. Politicians should not be picking the people they serve, but instead the people ought to pick their politicians. That is why an independent commission makes much more sense in drawing fair district maps that ensure the voices of all Oregonians are properly represented in Salem and Washington D.C.

I sincerely appreciate the citizens of Klamath & Lake county who took time to testify before the redistricting committees. It was no small task and I am very grateful.