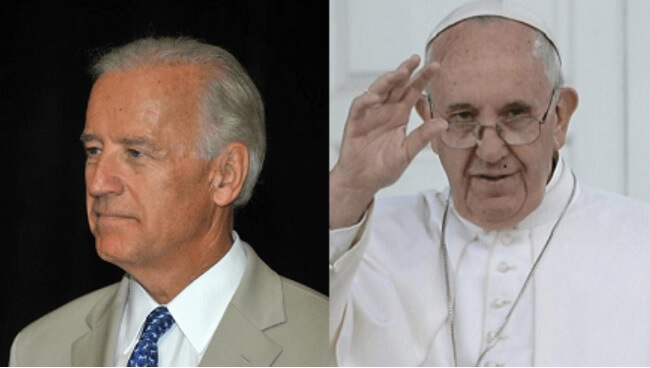 On October 29, 2021 President Joe Biden (D) met with Pope Francis, head of the Roman Catholic Church. In the aftermath of that meeting Mr. Biden was asked whether he and the Pope spoke about Mr. Biden’s fifty plus years of support for taxpayer funded abortion on demand. According to the Associated Press, Mr. Biden responded thusly:

“Biden said abortion did not come up in the meeting. ‘We just talked about the fact he was happy that I was a good Catholic and I should keep receiving Communion,’ Biden said.”

Mr. Biden is a notorious liar.

He is a practiced liar.

He is a consistent liar dating back to his days in law school and continuing during his days in the United States Senate and as Vice President under President Barack Obama. In most instances his lies are designed to escape responsibility when he is at fault or to take credit when he had relatively little to do with the subject. A classic example was reported by the Washington Post:

“Joe Biden painted a vivid scene for the 400 people packed into a college meeting hall. A four-star general had asked the then-vice president to travel to Konar province in Afghanistan, a dangerous foray into ‘godforsaken country’ to recognize the remarkable heroism of a Navy captain.

“Some told him it was too risky, but Biden said he brushed off their concerns.

“’We can lose a vice president,’ he said. ‘We can’t lose many more of these kids. Not a joke.’

“The Navy captain, Biden recalled Friday night, had rappelled down a 60-foot ravine under fire and retrieved the body of an American comrade, carrying him on his back. Now the general wanted Biden to pin a Silver Star on the American hero who, despite his bravery, felt like a failure.

His alleged daring in traveling to Konar was designed to demonstrate that he shared bravery with servicemen even though he never was one. It smacks of vain attempts to appear as something he is not – brave, noble, self-effacing, tenacious AND youthful. But the fact of the matter is that Mr. Biden never went to Konar province as vice-president. The hero was not a Navy captain. Mr. Biden never attempted to award the medal. And the hero never refused the medal. It was all a lie like most of what Mr. Biden says and does.

To this day Mr. Biden lies about almost everything. Like Hillary Clinton you have to assume that the first thing he says is a lie. For instance note the string of string of lies he told during the disastrous pullout of Afghanistan:

It is of little consequence to point to other politicians that have lied with regularity as an excuse for Mr. Biden’s countless lies. The sins of one do not abrogate the sins of others. And that is a good transition to Mr. Biden’s latest lies about his visit with Pope Francis.

Pope Francis, like popes before him, has been adamantly opposed to abortion. The Catholic News Agency reported that during a September 27, 2021, speech Pope Francis criticized today’s “throwaway culture:”

“There is the discarding of children that we do not want to welcome with the law of abortion that sends them to the dispatcher and kills them directly. And today this has become a ‘normal’ method, a practice that is very ugly. It is really murder.”

A week before that Crux magazine reported on a conversation with Pope Francis while traveling with him:

“ON BOARD THE PAPAL PLANE — Pope Francis on Wednesday said that Communion is for those who are ‘in the community’ and politicians who support abortion are ‘outside of the community.’ However, he also said that in these cases, it’s a pastoral matter that must be addressed by the individual’s pastor.

This is not the first time Pope Francis has condemned abortion or those who support the taking of human life as a result of abortion. Nor is it the first time that his predecessors have done likewise. During a May 9, 2007 interview, Reuters reported that Pope Benedict stated:

“ABOARD THE PAPAL PLANE (Reuters) – Pope Benedict on Wednesday warned Catholic politicians they risked excommunication from the Church and should not receive communion if they support abortion.

“It was the first time that the Pope, speaking to reporters aboard the plane taking him on a trip to Brazil, dealt in depth with a controversial topic that has come up in many countries, including the United States, Mexico, and Italy.

“The Pope was asked whether he supported Mexican Church leaders threatening to excommunicate leftist parliamentarians who last month voted to legalize abortion in Mexico City.

“’Yes, this excommunication was not an arbitrary one but is allowed by Canon (church) law which says that the killing of an innocent child is incompatible with receiving communion, which is receiving the body of Christ,’ he said.”

It is highly unlikely that Pope Francis, having issued such strong statements then told Mr. Biden that it applies to everyone but him. There is a difference between diplomatic politeness and papal approval.

Mr. Biden noted that his unyielding support for taxpayer funded abortion on demand never came up during his conversation with Pope Francis and he may be right in the sense that diplomacy often requires avoidance of contentious issues – a stupid rule but one that is practiced everywhere. However, there is another possibility.

The Vatican at the last minute elected to bar a televised broadcast of the meeting between Pope Francis and Mr. Biden. It may well have been because the Pope expected the issue might be raised and wished to avoid a public embarrassment of Mr. Biden. While Mr. Biden is at odds with the Cburch’s standing on abortion, he himself is well versed on Catholic orthodoxy on mortal sin.  If Mr. Biden sustained a lecture from the Pope on abortion, including an admonition that his soul is at risk should he fail to repent, it is entirely probable that the shock of such and admonition caused the whispered gossip about Mr. Biden soiling himself after the meeting to be likewise true.