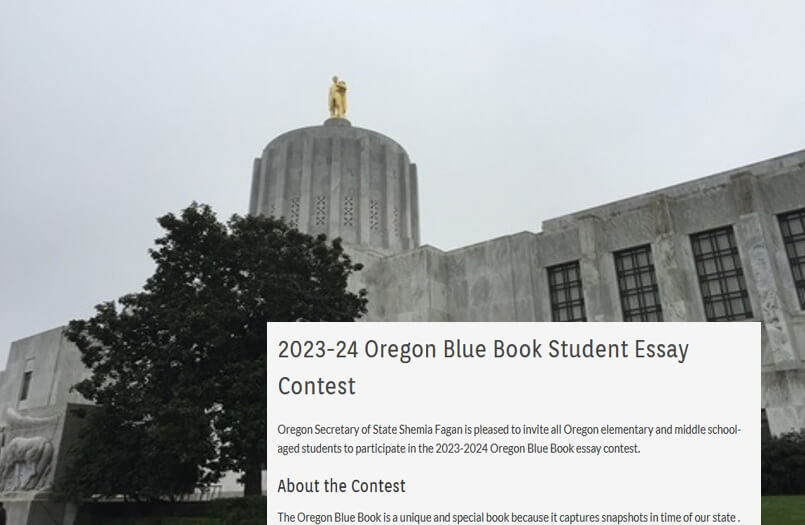 Oregon Secretary of State Shemia Fagan is hosting a youth essay contest for students to submit their experiences during the pandemic.  The chosen essays will appear in the Oregon Blue Book which is an official book of record for Oregon.   Parents should not turn down this opportunity when State Government is asking people for their testimony of the pandemic.

Here is the official news release below:

SALEM, OR — Oregon Secretary of State Shemia Fagan announced today the start of the Oregon Blue Book Student Essay Contest. The theme for the 2023-2024 Oregon Blue Book is, “Oregon Students Share Their Pandemic Experience.” Students are encouraged to submit written or video essays.

“The Oregon Blue Book is our state’s official almanac and fact book. Each edition captures a snapshot in time for Oregon with information about Oregon’s economy, population and elected officials,” said Oregon Secretary of State Shemia Fagan. “Given how the COVID-19 pandemic has impacted so many aspects of life for all of us, it’s my hope that this essay will give students a voice to express their own experience navigating a global pandemic.”

Elementary and middle-school aged students are encouraged to submit written or video essays. Written essays must be 100-300 words and will include an illustration to go with the essay. Video essays must be two minutes or less. Contest rules and submission information can be found here. The contest is open until Thursday, October 20, 2022. Winners will be announced in January 2023.

“I’m looking forward to watching and reading thoughtful essays from Oregon students about this unique moment in Oregon’s history,” said Stephanie Clark, Oregon State Archivist.
The Oregon Blue Book has been published since 1911. The Oregon Secretary of State’s Archives Division manages and publishes the book, which is released biennially on each odd-numbered year. The 2023-2024 edition of the Oregon Blue Book is scheduled to be released in February 2023. More information about the Oregon Blue Book can be found here.