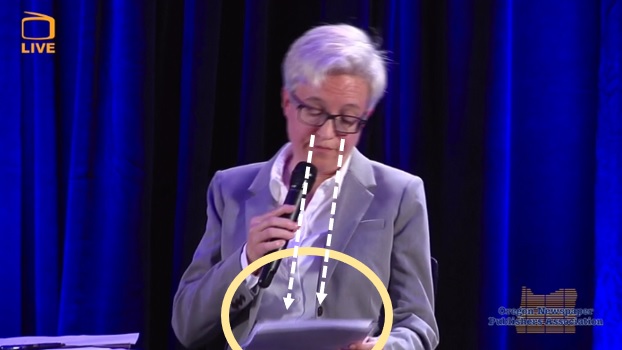 You will quickly notice that the liberal Democrat candidate, Tina Kotek, is slowly acting like a traditional stereotype Oregon Republican/conservative/governor candidate by being aloof, distant, highly technical and robotic.  (Think of past Oregon GOP governor candidates Saxton, Richardson, Dudley, etc…).

For instance, at the end of the debate during the closing speeches (a time usually when you get to shine) Tina Kotek kept reading from her text.  She even turned the page several times to read it all — barely giving enough actual face time to the audience.   Kotek actually had to refer to her notes to explain why she loved Oregon.

What she said was poignant, but it was diminished by reading from her notes. 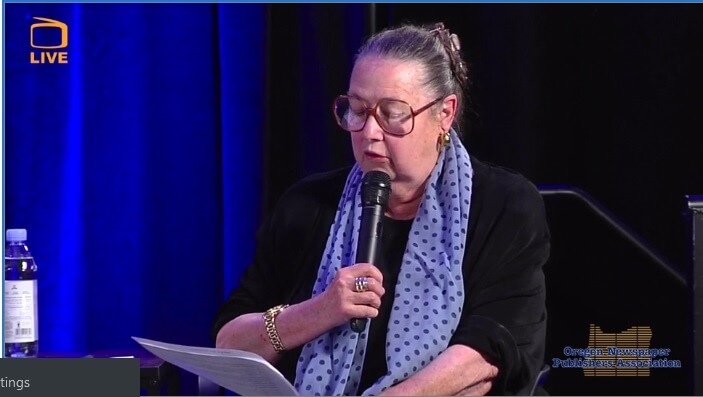 When Kotek was asked about the raging rural divide (since 9 counties have voted to study leaving Oregon for Idaho), Kotek gave a response saying, she cares about hearing everyone and listed an example of when she raised minimum wage (among the highest in the nation) that she took “special” effort to create a zone along the Oregon-Idaho border to lessen the impact least people flee to Idaho.   Her message to rural Oregon is, “Sorry I hit you so hard with my mandates, but I tried to to throw you a bone to lessen the destruction, be thankful, guys”.

When Kotek was asked what bold actions she would do fix homeless in just one single year, she responded with a call for more “workforces”, more “funding”, more “services” and “everyone must do their part”.  This left audiences with no actual idea on what she would do.   She even blamed Portland — which is again something a Republican would do — but now she is doing it.  How can she criticize Portland, when her former district represents Portland, and she has been quiet all this time?

This is not a just a Tina Kotek problem.

This is a one-group-in-power problem in Oregon.   It gave us Governor Brown which is now rated two years in a row as the least liked Governor in America by her own voters.   Kotek is continuing this reign of Oregon leaders who move up the ranks of power within the system rather than earning it on the campaign trail where you are forced to meet voters and answer tough questions.  Kotek’s primary only had a single viable challenger whereas the Republican field had nearly a dozen viable challengers.   During Kotek’s primary did the media ever ask her tough questions like, “how do you plan to fix the $26 billion Oregon PERS deficit?” or “Why did you vote for the $700 million Carbon Tax where the tax would be levied by un-elected agency bureaucrats?” or “Why did your top staffer get arrested at a Portland riot where people were throwing firebombs at Police and ransacked neighborhoods all night long?” or “Why did you require others to wear masks when you yourself didn’t?”  Liberal candidates will not be asked these tough questions during their primary because they are insulated form it.

Please understand, this is less about Tina Kotek, and more about how Oregon’s corrupt liberal politics is now cranking out terrible leaders based on insider political power and not actual people support.   This is how places like New York and Chicago tolerated corruption for so long.

As Kotek sounded like a traditional out-of-touch traditional Republican (in Oregon we are speaking), Christine Drazan broker her political party stereotype.

When asked about timber crisis she went personal with “This is my story. When I was growing up my dad worked in a veneer plant that disappeared, went away.”

On homeless, instead of blurting out the need for more “workforces”, “services”, “funding” like Kotek just did, Christine Drazan went personal, “In my freshman term as as Legislator, I became hyper-focused on helping homeless… I was amazed at how many youth in my district were homeless. Couch surfing. Sleeping in their cars while still trying to go to school long before the pandemic impact. I supported and passed legislation that created support of these students called Second Homes by Ecumenical Ministries, that matches up homeless youth with sponsors who have a spare bedroom. It is vetted, a safe place. More than 90% of students graduate from High School through that program…we must have both compassion and accountability.”  (Notice above how Drazan actually mentioned results in her response.   This is another stereotype broken, because it was overkill during the 2022 Republican Primary races to just rattle off how terrible things are in Oregon  Voters wants solutions).

Drazan started her opening speech by telling a personal story on growing up in a rural Oregon family  hit hard by tough economic times and where her parents personally felt abandoned and left out by the politicians who had no care on the impact of their failed policies.   Drazan’s comments helped wield the personal human interest story in tandem with the outsider/voter frustration spirit.  Good choice.

How did Betsy Johnson do?

On one hand, Betsy kept reading her notes way to much.  On the other hand she was bold, punchy and direct.  Johnson fit the narrative that unaffiliated voters are asking for.   There have been independent candidates in Oregon before, but rarely have they come with an actual voting record and a history of doing things.   When looking at the Johnson race, keep an eye that this race will play in Oregon politics for the next decade no matter the election outcome.