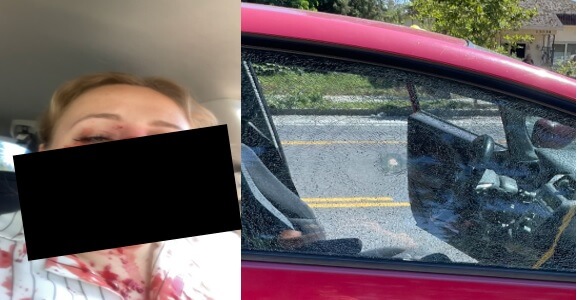 A Ukrainian immigrant, Katie Guzenko, has found that Portland has been the unexpected place to find danger compared to her childhood homeland of Ukraine. Relatives in Ukraine fear for her safety in crime spree Portland.

Guzenko was driving to a Bridal shower when she was shot in her car driving down one of Portland’s busiest streets. She got caught between a hail of gunfire between two shooters. Over thirty rounds were fired.

Guzenko has now spoken out against violence in the City of Portland.

She herself captured the moment after she was shot and put the video online for all to see.  You can view her self-posted video here.

Her story represents the hundreds of victims of gun violence, both injured, killed and impacted by Portland’s crime spree increase (the nation’s worst in 2021 for homicide)

She said: ‘My family there is reaching out to me to make sure that I’m OK, when they’re the ones in a war zone.’

Katie told Mayor Wheeler that his goal to cut shootings by 10%, “is an incredibly low target when comparing it to how much it’s increased.”

She added: “Mayor, given that you’ve called us a gun violence emergency, I feel like very little as being done.” pic.twitter.com/2LZp1rZr3d