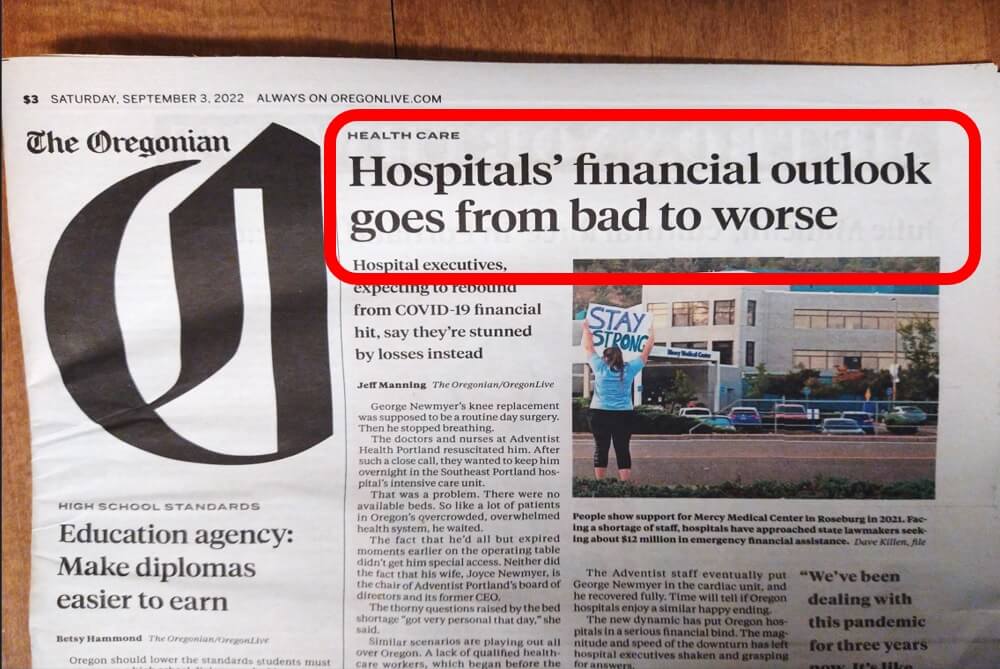 In just four months, Oregon hospitals have lost $103 million dollars and the problem is much bigger than blaming Covid alone.

Before the pandemic hit, Oregon was rated as the 50th state in hospital capacity. 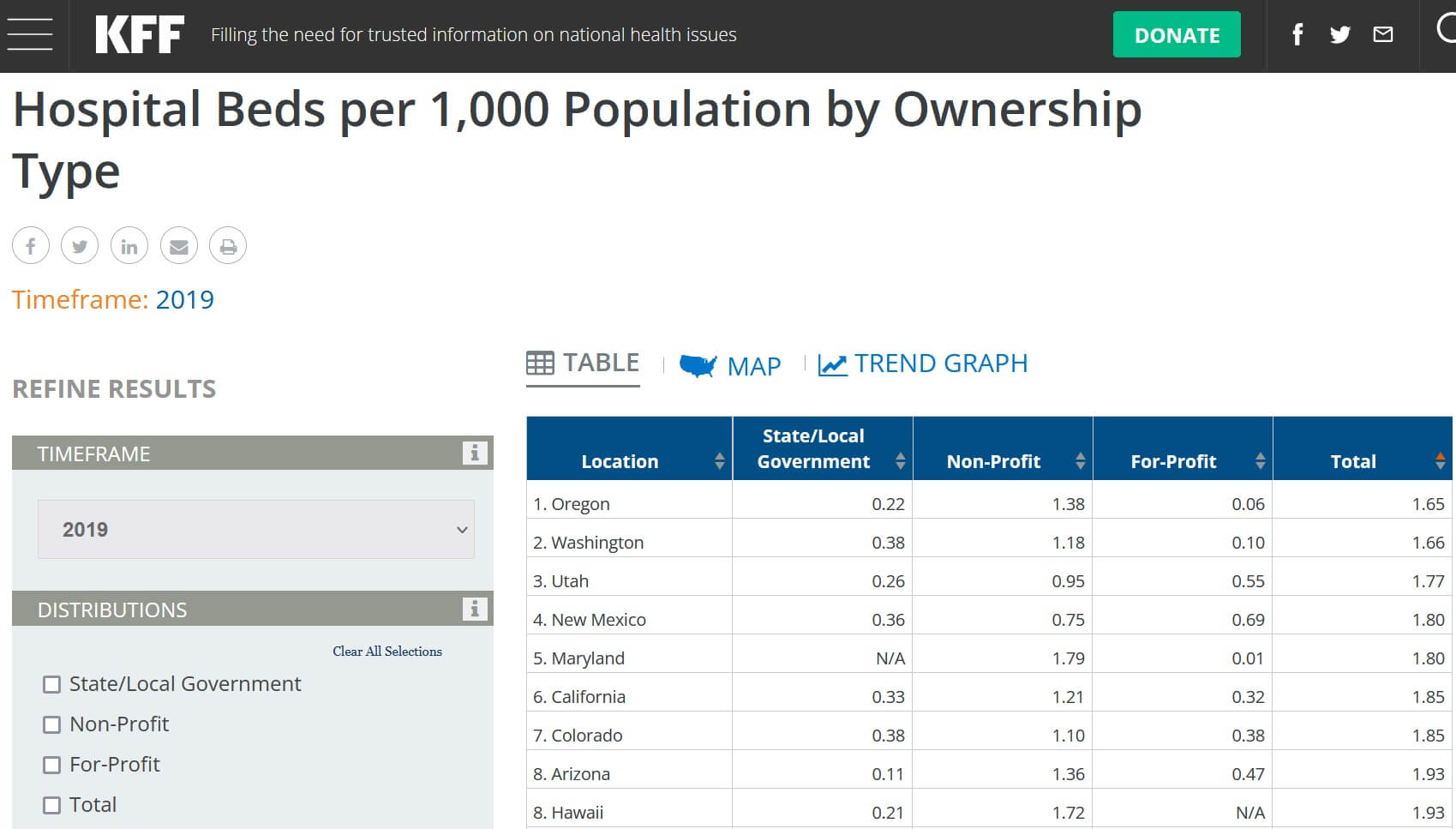 In fact, most of the top 20 worst hospital bed capacity states were liberal.  Who saw that coming.

Hospital bed capacity is a measure not of physical rooms but more of nurse/medical staff availability.

Some of the reasons Oregon rated so low was because the liberal politicians, (Gov. Brown, Pres. Courtney, Speaker Kotek) passed massive near-$400 million tax on hospitals.  At the same time the politicians jacked up labor costs with near-national high minimum wage laws, mandatory health worker salary increase laws and various new payroll taxes.  So politicians loaded hospitals with extremely higher costs while taking more of their revenue away at the exact same time.  Then unions helped politicians pass anti-competition laws which set up barriers to nurses being hired from other states.  While other states were offering $12,500 bonuses to hire nurses, Oregon was screaming NOT WANTED.

Congress gave Oregon $4 billion in various Covid relief funds.  Politicians spent a lot of those funds, not on hospitals or staffing, but on non-emergency political projects and economic development projects.   Even the political lobby firm, Oregon Asian Affairs, got a million dollars of Covid funds to buy a new lobby building.   I bet they’re new building gives them lots of of room capacity while hospitals are putting patients in the hallways.  The politicians had so much Covid money to spare that they put a billion dollars of it in a slush fund for later use.

There is a lot of different viewpoints on the vaccine mandate, but one stands out the most to us.  Most states did not have a healthcare vaccine mandate.  Of those minority states that did, many offered a flexible option of either getting vaccinated or take a 5-minute test every week.  Only six states had the most inflexible mandate of them all — get vaccinated or get fired with no exceptions. 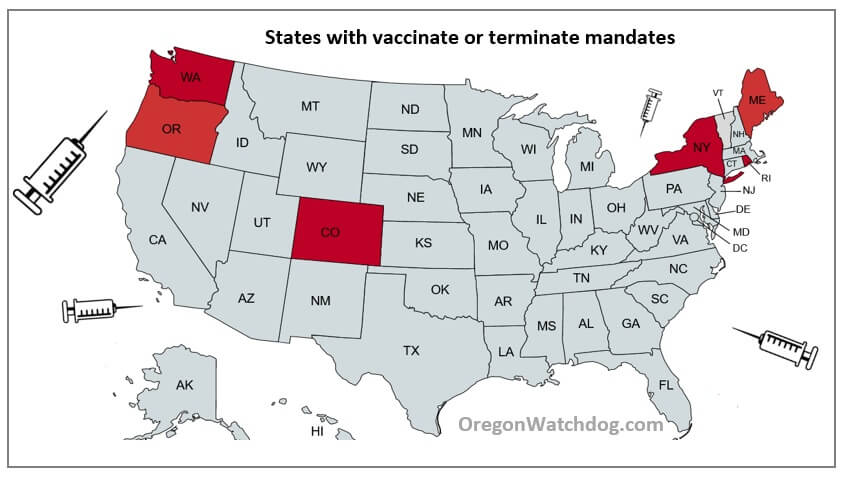 Healthcare workers fled Oregon hospitals in droves under the new mandate.  Right as this was happening, a second group of health workers began to leave in large numbers — these were vaccinated (yes, vaccinated) healthcare workers who refused to participate in the upcoming chaos of seeing already understaffed hospitals now deal with less staff due to the approaching vaccine mandate kicking out vaccinated staff.  After experiencing the single worst year of their work lives under Covid, you can’t better understand what these vaccinated nurses were feeling inside.  These vaccinated workers were also lured by independent traveling nurse opportunities for which these private firms offered to pay nurses nearly three times as much to work independently in hospitals in select areas around Oregon.  Witness the cycle of dysfunctionality.  Government laws help push nurses out of their job and desperate hospitals re-hire them at double and triple the rate at different locations.

While this was going on Governor Brown flew to Europe at taxpayers expense for a climate conference.

The dire $103 million in plunging revenue by Oregon hospitals in the first quarter may hit $400 million by year’s end.  I guess the near $400 million health care tax that politicians passed years ago might have come in handy to actual hospitals and health care companies as they stand to lose $400 million.

This is serious.  St. Charles Health System in Bend is laying off 100 workers and freezing another 55.

Gov. Brown, Tina Kotek and the government unions got most of everything they wanted over the last 10 years to control our private health care system and now it is failing and people are being hurt and dying.

The progressives built their health care utopia in Oregon and it has been falling apart.