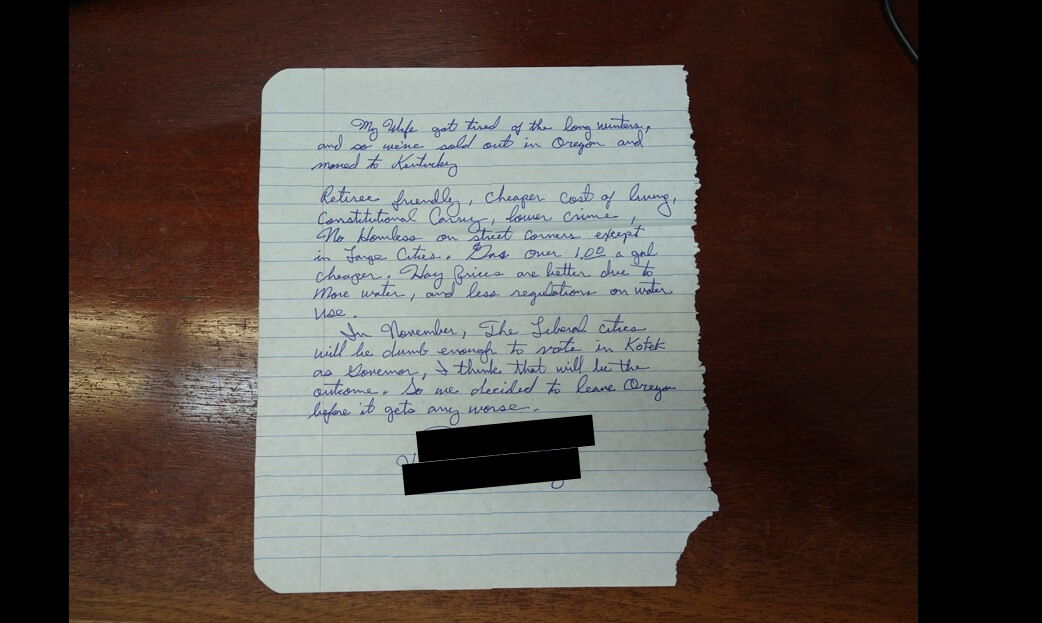 One of the Taxpayers Association of Oregon supporters just sent us this nice unexpected letter informing us that they had left Oregon for many reasons including the fear of a Tina Kotek Governor election win.  Read his words;

“My wife got tired of the long winters and so we’ve sold in Oregon and moved to Kentucky.  Retiree friendly, cheaper cost of living [Editor’s note: Oregon is nation #5 highest cost of living state], Constitutional carry, lower crime, no homeless on street corners except in larger cities.  Gas is over $1.00 cheaper.  Hay prices are better due to more water, and less regulations on water use.  In November, the liberal cities will be dumb enough to vote in Kotek as Governor.  I think that will be the outcome. So we decided to leave Oregon before it gets any worse”

The fact that this man and his wife decided, in part, to leave over fears of a Kotek win.

Fox & Friends last week interviewed a former Oregonian who left the State over fears of where it was heading.  He now resides in Florida.

Gayle Montgomery, who moved from Oregon to Arizona, left this Facebook message in reply to this very article, “We moved 1 yr ago … my husband & I were both born in Oregon. The insane politics, the deterioration of once beautiful cities & TAXES drove us out. We find Arizona quite nice…and as they say “birds of a feather flock together “.

But Oregonians shouldn’t fear the future.

Kotek has been behind in the polls and in fundraising.

It may not happen.

Don’t pack your luggage yet … instead pick up your ballot and vote this election.  Pick up a lawn sign.