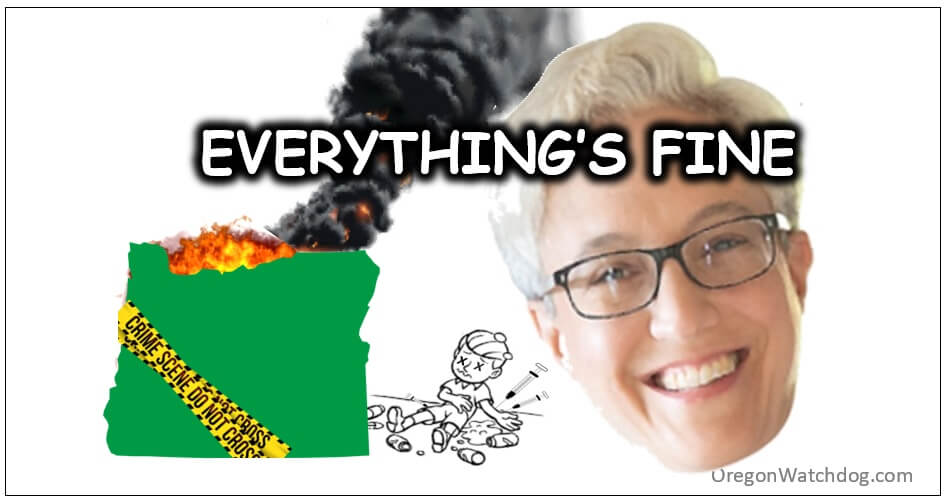 Last week’s Oregonian poll found among Oregon Governor candidate Tina Kotek supporters that, “57% of Kotek backers said Oregon is on the right track and 22% said they didn’t know if it is headed the right or wrong way.”

#1 Kotek voters are sheltered from her bad policies:  Tina Kotek’s party affiliation (Democrat) leans heavily toward higher income voters.  IRS data shows that 65% voters who make over $500,000 live in mostly Democratic neighborhoods whereas and 74% of those making under $100,000 live in heavily Republican neighborhoods.    Higher income people are better sheltered against the impacts of crime, inflation and homelessness.   This is why in another Oregon political poll, the super-liberal and face of Oregon’s defund police movement, Portland Commissioner JoAnn Hardesty, is at only 25% support.   This is why in recent elections in New York City (2021) and San Fransisco (2022) the people to vote for pro-police candidates were in Black and Hispanic neighborhoods whereas the people who voted for defund police candidates were in neighborhoods outside the city in traditional affluent, majority white liberals neighborhoods.   Rich white liberal voters outside the city were voting for more crime in the inner city and they were thinking they were civil rights heroes for doing it because they were caught up in the false symbolism of the vote and not the consequence.

#2. Liberals value political utopia over political reality.  As long as government is making historic leaps to the Left, it doesn’t matter how badly it fails.    The fact that Multnomah County showered homeless people with $500 cash debit cards is a sign to liberals as a grand display of compassion, but to everyone else, a quick way to grow the homeless population.   It doesn’t matter that Kotek’s rent control caused rent to increase 47% because a liberal program doesn’t have to be successful to work, it just has to sound good passing it.

#3. Liberal voters live in a media bubble.   People choose media sources that agree with them and therefore unknowingly shelter themselves from ever seeing some of the biggest stories in Oregon because the story didn’t fit the online media algorithm that selects which stories they will see.

Just look at the overly biased headlines from the Oregonian on a * SINGLE DAY * in yesterday’s Sunday Oregonian (10/2/22). 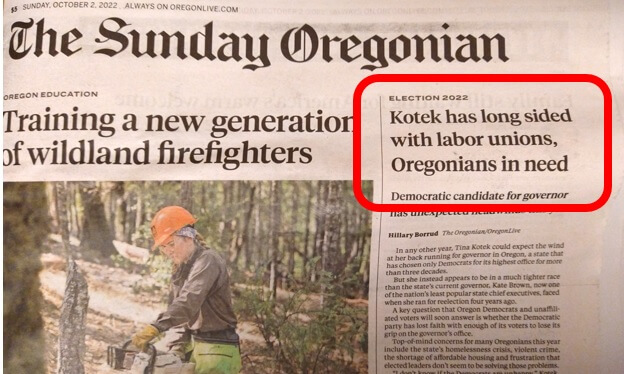 • As seen above, Tina Kotek gets the best headline a Governor candidate could wish for as the Oregonian lavishes Kotek as a longtime advocate of “Oregonians in need”.   How biased.  Compare that to Betsy Johnson’s profile headline from last week, “Unaffiliated candidate would bring longtime skepticism about government to the job.”   To the media, Kotek is like Mother Teresa and Betsy Johnson is just a skeptic. 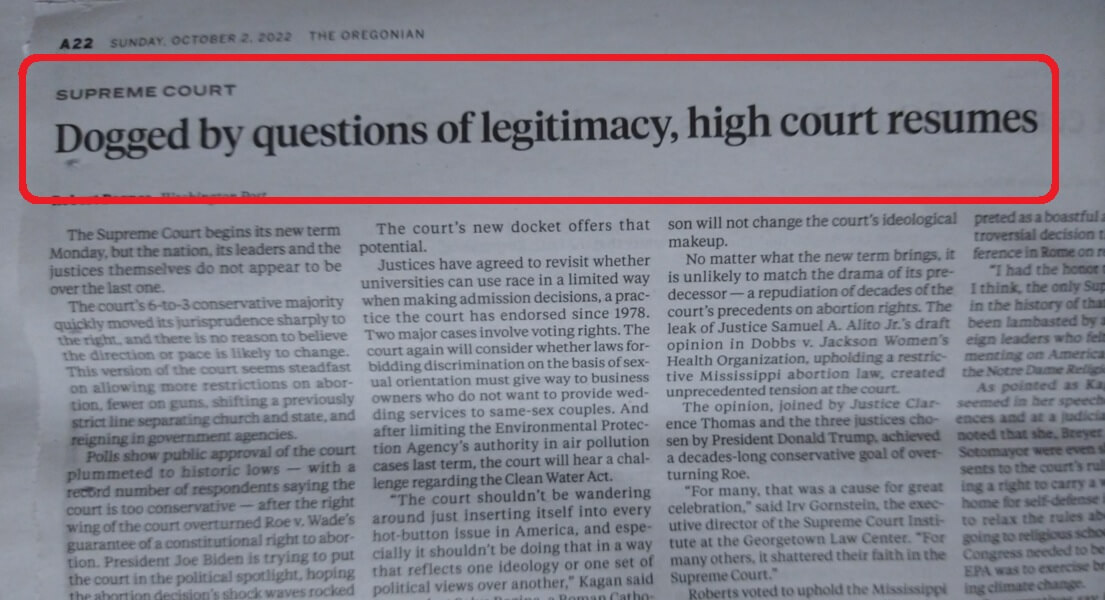 • Also in the same newspaper and on the same day, is this Oregonian featured article raising questions about the very “legitimacy” of the Supreme Court court.   To the media, courts are legitimate when they issue liberal rulings and illegitimate when they are conservative.   Please Oregonian newsroom, don’t debase our legal system at a time when people are threatening to kill Supreme Court Justices outside their very homes and when others are advocating packing the Supreme Court just like dictators do. 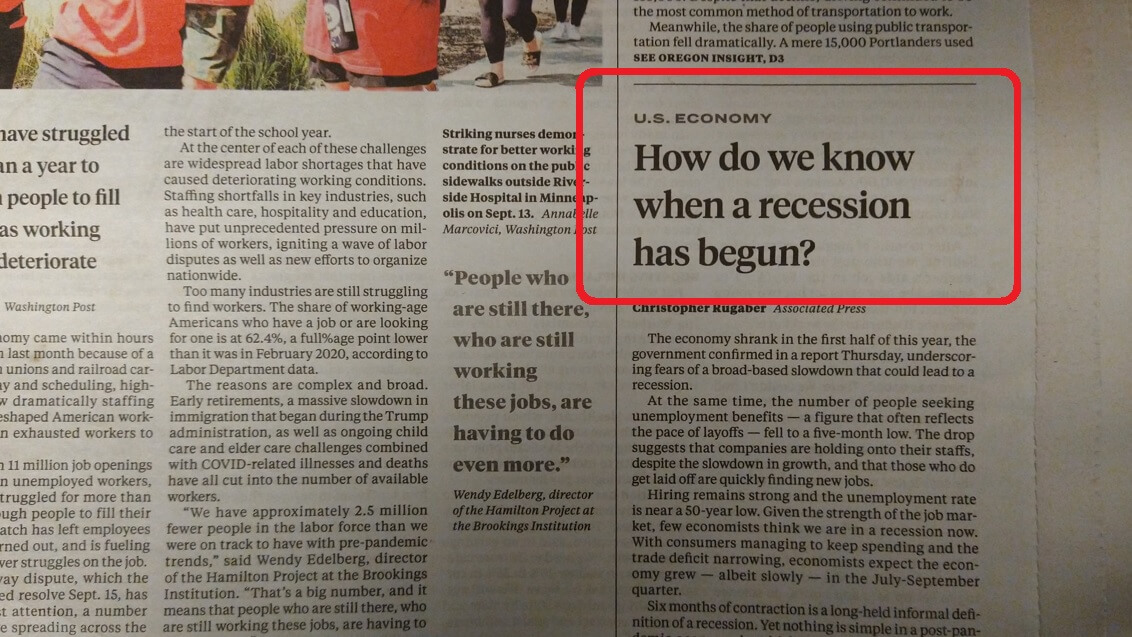 • Also in the same newspaper and on the very same day, is this featured article that questions whether we are in a recession. No wonder Kotek voters think Oregon is on the right track when the media implies that we may not be in a recession.    The media, economists and lawmakers have held a universal definition of a recession UNTIL a liberal president found himself in one.   We documented how even Biden’s own staff contradicted their own words to redefine themselves out of a recession.

This media bias mentioned in depth because it would be too easy for us to simply write an article blaming Kotek supporters as out-of-this-world or insane.   Instead, we are identifying some real-life political problems, like unreached voters caught in a bad media bubble, which is something we must face and fix.   If Oregon is to change beyond the November election, we need to invest and address these systemic problems of media famines among voters.

You can fight media blackouts and media bias by using Oregon Watchdog news ticker.  The site selects media articles from 20 different sources, so you never miss a story.  Because Watchdog selects from 20 different sources you can see everyday which media stories are being left out and which stories you are not seeing.  Don’t you want to know what important news stories you are not seeing everyday?

Oregon Watchdog does not censor articles by politics, so you are not being treated like a child nor a partisan robot.    Oregon Watchdog is free.  It also has an email option where you can get the headlines sent directly to your email box (either daily or weekly).

It has been around for 20 years, thanks to the Taxpayers Association of Oregon.  We don’t want to just complain about media bias — we want to something about it. 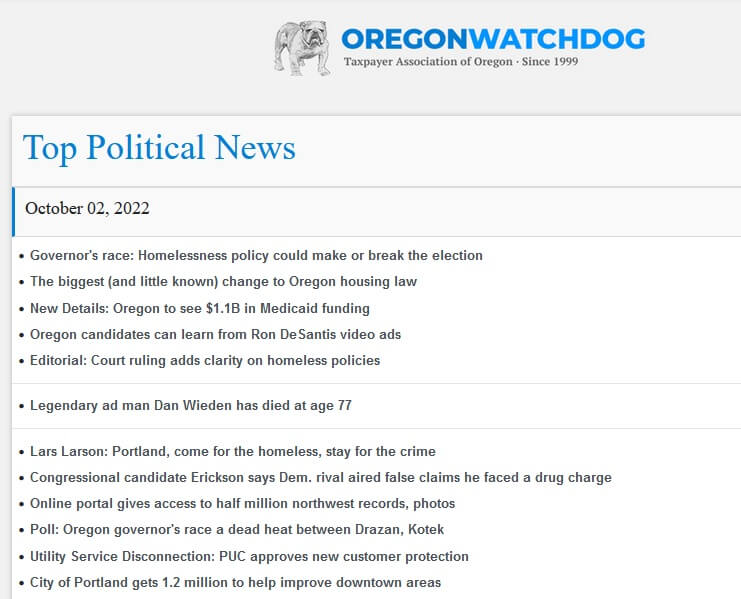