The news ahead is so dire, we had to cram it into a single article.

“Unless a court intervenes before Measure 114 takes effect on Dec. 8, it looks like after that date private citizens will no longer be allowed to buy a firearm in Oregon for a good long while. But the promoters of the initiative didn’t mention that.The measure was sold as a “common sense” safety law. It requires a police permit before you can buy a firearm, and to get a permit you have to prove you know how to use a gun. What’s wrong with that?Well, the law also says that to get a permit to buy a gun, you have to prove completion of a firearms training course that is “offered by law enforcement, a community college, or a private or public institution or organization or firearms training school utilizing instructors certified by a law enforcement agency…”Local police and sheriffs do not “certify” instructors for the general public. Nor do they offer public firearms training. Linn-Benton Community College doesn’t offer such training either. Maybe some private gun ranges or self-defense instructors do, but they are not “certified by a law enforcement agency.”The State Police say they are working on administrative rules to carry out the new statute. But whenever the rules are adopted, they presumably can’t change the plain wording of the law.”

Could you imagine government banning a grocery store from offering flavored drinks or a liquor store from banning flavored liquor?  Well, on Monday night, Multnomah County is considering a county ban on flavored vaping and tobacco products.  Most people use flavored vaping products, so it will bankrupt many local shops who spent years building their small shops only to have it evaporate in a matter of weeks.

The County wants to ban flavor among adults to keep it from kids.  Once politicians go down this road there is no end to the things they will ban for adults in the name of children. This is sad, because vaping is often the #1 way people quit smoking.  According to the Wall Street Journal, most of the high-profile problems associated with vaping illnesses can be traced to (1) Marijuana THC-based products (2) users illegally tampering with the product and (3) cheap black-market products made in China and Mexico and illegally sold online. Instead of focusing on solutions to these three key problems, County politicians simply want to punish everyone and ban mostly everything. By wiping out the vaping market in Multnomah County, sales will flock to online black markets where the product is not regulated, and is extremely dangerous and with no tax revenue collected. This is a massive lose-lose situation: Local legal shops get destroyed. Local jobs lost. Local vaping tax revenue (to fund health care costs) declines. The winners are illegal online sales. The State/County should instead be prosecuting black market criminal enterprises and smugglers and not rewarding them with new customers.   You can submit testimony here.

State Representative Raquel Moore-Green review of the budget forecast says that Oregon is expected to lose 24,000 jobs in 2023.

When this happens, payroll tax revenue will decline.  When this happens tax revenue declines for politicians to spend.  The fact that the politicians have had 10 years of repeated record-breaking budget revenue means they will be forced to go cold turkey very quickly as they must go from lavish spender to responsible budget balancer.   They won’t.  They will likely call for higher taxes.

Just look at fast they have been growing the budget. 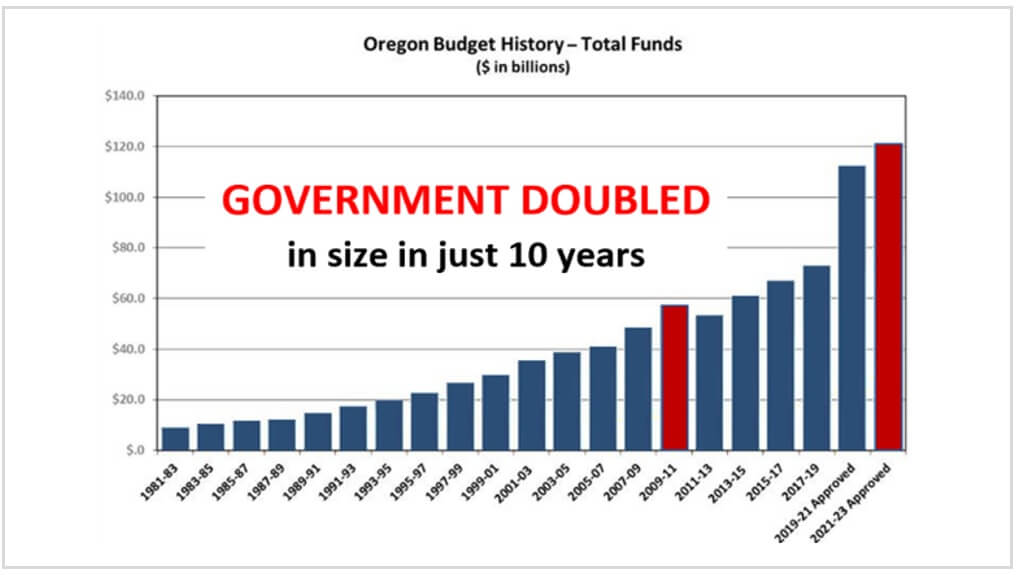