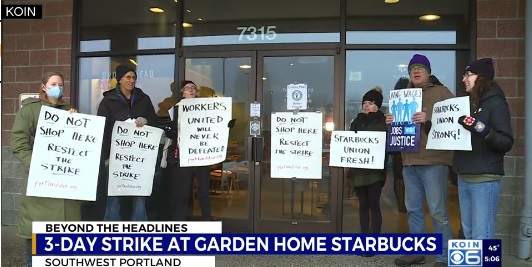 KOIN reports “Some workers at a Southwest Portland Starbucks are going on strike, the latest to join the ongoing labor disputes between Starbucks and employees at hundreds of stores across the country.Sunday is the final day of a planned 3-day strike for workers in the Garden Home area. They claim the company is allowing non-union employees to be tipped through their store’s card readers but took away that option for those at union shops.“

This comes at a time where Starbucks has been hit with a 5th labor suit and has been closing stores (including Oregon) due to increased crime and vandalism.   Starbucks now has to juggle the battle from the inside (unions, strikes) and the outside (recession, supply chain shortage, inflation, worker shortage, crime wave in liberal cities).