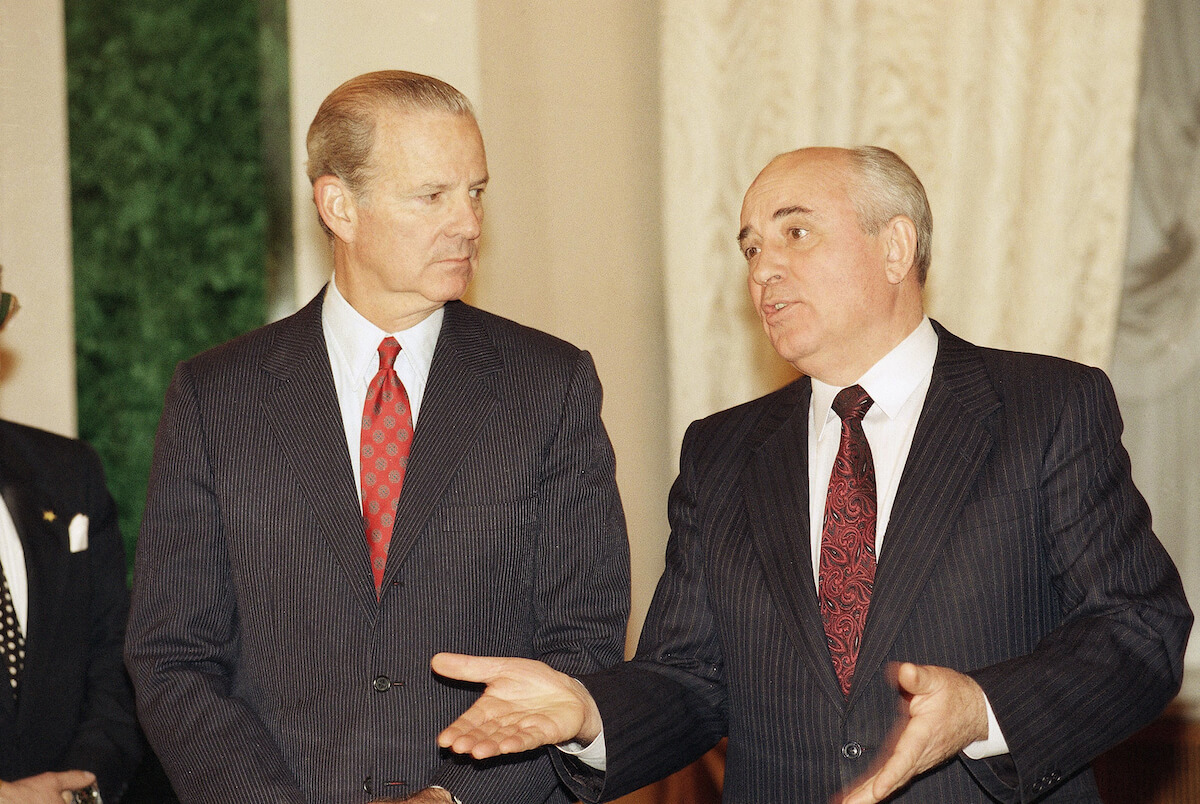 Because James Baker was the Secretary of State at the end of the Cold War, Peter Baker’s excellent biography of George H.W. Bush’s most trusted advisor, The Man Who Ran Washington, offers a timely glimpse at the promises the United States made to Russia just over three decades ago. These promises can help inform our understanding of Russia’s perception of its own security concerns.

The first momentum behind the collapse of the Soviet Union, a turn of events Vladimir Putin considers a “genuine tragedy” began with the unification of Germany. Baker was at the center of the Bush administration’s negotiations that lead to the end of the Deutsche Demokratische Republik, Soviet-occupied East Germany.

Within a couple of months of the fall of the Berlin Wall, it was clear to Bush and Baker that, as the president dictated to his diary, “reunification appears inevitable.” But that did not mean they had any real plan yet for making it happen, other than assuming it was too important a matter to leave to others. Both the president and secretary of state took it for granted that the United States had to set the course. “We’ve got to lead,” Bush told Baker and Brent Scowcroft after one particularly nerve-wracking round of conversations over a weekend in February 1990 with Helmut Kohl at Camp David and then Margaret Thatcher by telephone. The formidable British prime minister was still extremely wary of a reunified Germany, telling the Americans she was more worried about it now than about the Soviet threat.

At the same time, Baker realized how sensitive the Germans were to the notion that their future would be determined by the Four Powers who still held some measure of authority by virtue of their victory in World War II. In the past, meetings of the representatives of the Four Powers with the two Germanys had come across as demeaning to the Germans, as if the four grown-ups were at one table and the two Germans were at a small side table. “We called it the cat table,” said Horst Teltschik. When Vernon Walters seemed to be repeating that with his meeting on the eve of Baker’s Berlin visit, Hans-Dietrich Genscher quickly complained to Baker. The American secretary reassured the foreign minister. “Hans-Dietrich, we understand you,” he said.

Baker knew that the Soviets also had to be assuaged and made to feel as if they still had some sway over what was to come. Having lost 27 million people in World War II fighting the Germans, the Soviets did not consider Germany’s status some abstract historical curiosity. Practically no Russian family had been spared from devastating loss. Even if Mikhail Gorbachev and Eduard Shevardnadze were privately willing to accede to German unity, they had complicated domestic politics to navigate, both with hard-liners in the security agencies and with the broader population. Baker was searching for a diplomatic approach that would, at the very least, give Moscow some face-saving role in the coming negotiation.

The solution he seized on was a formula cooked up by his advisers at the State Department called Two Plus Four, meaning the two Germanys plus the four World War II victors. Over time, a debate would develop over who exactly first conceived the idea—Frank Fukuyama and other members of the policy planning team had worked all through the Christmas holiday on the proposal and Dennis Ross sent their plan on to Baker by late January. Baker had no pride of authorship on this one; his practice was not to come up with ideas so much as to recognize the good ones and run with them. Under the plan, the two Germanys would take on the central task of negotiating between themselves with the four others playing a subsidiary role confined to issues dealing with external security. This would give the Soviets cover, to make it look like they were a part of the process rather than having it imposed on them. “You had to make it appear that this wasn’t a total defeat for them,” said Ross. Brent Scowcroft, however, was dubious. He thought the Two Plus Four concept would add too many players to the process and, ultimately, slow it down. Still, he was willing to defer while Baker tested the idea with the other parties.

Genscher reacted favorably as long as it really was “Two Plus Four and not Four Plus Two,” which Baker understood. Baker also adopted an idea that Genscher had advanced in a meeting in Washington that would reassure the Soviets by agreeing that NATO territory would not move eastward with a united Germany and that the alliance would not advance its forces beyond the old lines. Baker then flew to Moscow to try out his concept on the Soviets. Along the way, he met with Roland Dumas, the French foreign minister, during a 2 a.m. refueling stop in Shannon, Ireland, and secured his support. From there, Baker stopped in a foggy Prague, where he met with Václav Havel, the leader of Czechoslovakia’s Velvet Revolution.

By the time Baker made it to Moscow, the Soviet capital was consumed by its own political tumult. On February 7, just as he was arriving, the Central Committee of the Communist Party agreed to the latest Gorbachev reform proposal and voted to give up its monopoly on political power. Other parties, banned since the days of Lenin, would now be allowed. The world seemed to be spinning so quickly that neither Baker nor anyone else could keep up. As he traveled, a debate broke out among his staff about whether he should stop in Bulgaria after Moscow, a decision complicated by uncertainty over whether the government in Sofia would still be in office by the time he got there. In case that were not enough, in South Africa, the anti-apartheid leader Nelson Mandela was released from prison after twenty-seven years of captivity, presaging the eventual collapse of white minority rule.

In Moscow, Baker rolled out his Two Plus Four proposal to Shevardnadze, offering what he called “iron-clad guarantees that NATO’s jurisdiction or forces would not move eastward.” Baker met with Gorbachev in St. Catherine Hall in the Kremlin on February 9. The Soviet leader exuded self-confidence and strode into the hall as if he did not have a care.

“Events are moving rapidly in the world since Malta, more rapidly than any of us would have thought,” Baker told him. But “for what it’s worth, our relationship has moved from competition to cooperation.”

“Those are my feelings,” Gorbachev replied. “I have to tell you, there are one or two persons in your country who still regard us as the enemy. Let’s face it. That’s reality.”

“There are fewer of those,” Baker said, although in fact back home he and Bush were getting more and more fed up with the “right-wingers,” as Bush called them, who seemed increasingly out of step with the rapid warming of relations with the Soviets.

Baker and Gorbachev discussed the status of ongoing nuclear arms talks as well as Bush’s latest plan for a cap on conventional forces in Europe. Then they moved on to possible agreements on chemical weapons and a nuclear test ban. “I saw our negotiator yesterday in the men’s room,” Baker said, “and he told me he was making progress.”

But the electric question of the moment remained Germany. Baker explained his Two Plus Four concept to Gorbachev, who said he had been thinking about a six-power forum himself.

“I say Four Plus Two, you say Two Plus Four,” Gorbachev said. “How do you look at this formula?”

“Two Plus Four is a better way,” Baker said. It put the German states first.

To reassure Gorbachev, Baker brought up Genscher’s idea and took it a step further. “There would be no extension of NATO’s jurisdiction for forces of NATO one inch to the east,” he told Gorbachev, coming back to the formula three times in the course of the conversation. The addition of the word “jurisdiction” was a mistake, a careless change in vocabulary of the sort that the lawyerly Baker usually avoided. It would come back to haunt him.

Gorbachev seemed resigned to the merger of East and West. “There is nothing terrifying in the prospect of a unified Germany,” he said. But he insisted it should not be part of NATO, as Bush and Baker wanted, and broached the idea of a neutral Germany, belonging to neither Eastern nor Western alliance.

“A neutral Germany does not necessarily mean a demilitarized Germany,” Baker cautioned, as he reverted to the official line, arguing that Europe would be better off with a reconstituted Germany firmly anchored in NATO. He asked Gorbachev if he would rather see an independent Germany outside NATO with no American forces present or a united Germany tied to NATO with the stabilizing presence of the United States.

Gorbachev said he would think about that. But, he quickly added, “Any extension of the zone of NATO is unacceptable.”

The administrations that followed didn’t keep that promise. Poland, Hungary, and the Czech Republic became NATO members in 1999 (Clinton), the year NATO went on the offensive to fight the Kosovo War. Bulgaria, Estonia, Latvia, Lithuania, Romania, Slovakia, and Slovenia joined in 2004 (W. Bush). Albania and Croatia joined in 2009 (Obama). Montenegro joined in 2017, and North Macedonia joined in 2020 (Trump). The Biden administration sought to fast-track Ukraine for NATO membership, and the war there appears to be Russia’s attempt to prevent that from happening.

Putin is no Boy Scout (or even a Young Pioneer), but try to see the map from his perspective. If Russia so much as sends a single warship to dock at a Venezuelan port, Fox News will typically have a cow. Imagine if any country in the western hemisphere were to be in a formal alliance with Russia that based forward-deployed Russian troops and hosted a Russian air base. Ukrainian membership would be analogous to that country being Canada or Mexico.

That is not to say Russia’s invasion of Ukraine was justified, but these historical facts certainly raise more basic questions. Was the eastern expansion of NATO good for American security? Or did that actually create the cost of escalation toward Russia without producing any real security benefit? Would the world be a safer place if America had kept its promise?