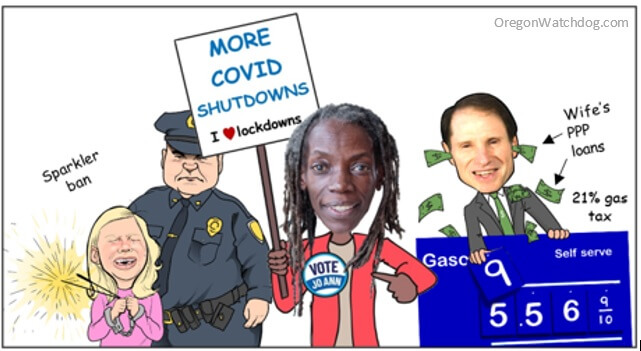 •  Teachers lobby for four-day work week. During Covid, Oregon was among the first schools to close and last to reopen (almost a year later than other states).  Even before Covid, Oregon schools ranked among the shortest term length.   Yet, Portland teacher unions tried to push for a four-day work week, which would have been a nightmare for parents. The unions say the four-day week is needed to address the teacher shortage, which exploded when Oregon was among only six states that forced teachers to get vaccinated or be fired—without exceptions.  Also, some teachers are leaving for other states to receive $25,000 hiring bonuses while Oregon politicians banned hiring bonuses.  (Portland Tribune 1/29/22)

•  $800,000 in Oregon tax dollars to fund extreme “abolish police” leftist non-profit.  The State of Oregon awarded $800,000 (Hb 4050) to the Oregon Justice Resource Center.  OJRC tweeted about police and prisons that “We must dismantle/defund it all.”  One of its lawyers told a Portland crowd the U.S. Constitution and all police officers are fascist.  Another employee, Breatrix Wing Ling Li, celebrated the hospitalization of journalist Andy Ngo and the sabotage by rioters of a Portland cafe because the shop hosted a coffee-with-cops program. She also once tweeted: “We don’t need reproductive rights if we kill all men.” (Fox Business 12/15/21)

•  $850,000 to fund veterans living in squalor.  Portland’s Joint Office of Homeless Services wasted $850,000 on a hotel that was grossly unsanitary, unsafe, overrun with toxic mold, and eventually unsound enough that the roof collapsed and the building was condemned.   Amid widespread drug use, many hotel tenants were so abusive that the program caretakers could no longer conduct wellness or safety checks, leading to more anarchy and worsening conditions.   (KGW-8 6/7/22)

•  Portland airport overspent by $100 million to build a luxury roof.  Instead of spending an estimated $20 million for a basic steel roof, Portland International Airport spent $125 million for a super-expensive art designed roof.  This $125 million was funded by airline fees that could have been better spent constructing more airport restrooms, adding more TSA agents to move lines quicker, or simply reducing airline fees so flying can be more affordable.  (OPB 7/14/22)

• JoAnn “more lockdowns” Hardesty.  City Commissioner Hardesty defunded Portland police by $12 million and 100 positions, causing the city to suffer the greatest homicide rate increase in the nation in 2021.  During the Portland riots, Hardesty first blamed acts of arson on Portland police secretly setting fires, then under backlash, Hardesty changed her story to white supremacists secretly setting fires. During the election, she became the only known pro-lockdown candidate when she attacked her opponent for advocating that schools be opened earlier —even though the state was among the final 12 in America keeping schools shut. Because Oregon kept its schools closed longer, the state suffered the nation’s fifth-worst drop in test scores. In 2022, she failed to show up in court over two unpaid credit card bills totaling $16,000.   Apparently, she defunded not only Portland Police but herself.

•   Prof. Jane “enviro-scandal” Lubchenco: Lubchenco, an Oregon State University professor, Biden advisor, and “no-fishing zone” policy proponent faced a rare scientific sanctioning for her debunked commercial fishing study that was determined to be environmentally fact-hyped, contain false data, and written in part by her own brother (without disclosure).  The study was soon retracted.  This calls into question how many other environmental studies use flawed data yet provide justification for government agencies to shut down fishing, farming, and ranching.   Previously, while working in a different federal environmental agency (NOAA), she was involved in a misuse of agency funds.  (OPB 8/16/22, The Fishermen 4/22/21).

(Government sticking its nose where it shouldn’t)

•  Measure 114 overnight made everyday handguns illegal.  Recently passed Measure 114 bans the use of any firearm that can contain more than 10 rounds of ammunition (except for very specific circumstances), which could easily apply to tens of thousands of currently legal firearms—especially since most handguns in America hold between 10 and 17 rounds.  Measure 114 also creates an intrusive database of gun owners’ private information in a searchable database. (Washington Times 6/2/22)

•  Banning sparklers to fight climate change.  Portland city officials have outlawed all sparklers and fireworks inside the city limits as a way to combat climate change from fireworks and accidental fires.  Portland City Commissioner Dan Ryan said, “We’re in a climate crisis that’s forcing everybody to look at their pleasures they get out of life.” Commissioner Jo Ann Hardesty said, “We must change behavior.” (OPB 3/4/22)

•  Oregon bans hiring bonuses.  The Oregon Legislature banned businesses from offering hiring bonuses.  Tri-Met transit has had to cease its $7,500 hiring bonuses as a result. Proponents say that non-minorities disproportionately accept hiring bonuses, so making it illegal for all Oregonians will somehow help promote equity. Now no minority can get a hiring bonus. (KATU-8/10/22, HB 2818)

• Banning pet stores from selling cats and dogs:  Under pressure from political animal organizations, the city of Bend has debated banning pet stores from selling cats, dogs, and rabbits.  Oddly, no store in Bend actually sells cats, dogs, and rabbits, so this ban would only stop any store in the future from considering it.  Such a ban could have the unintended consequence of reducing oversight of known sellers, while driving people to unregulated private sellers. (Bend Bulletin 8/1/22)

•   Letting prisoners work outside unsupervised for hours.  In Hillsboro, prisoners were allowed to do outdoor work on a crew in a five-acre area unsupervised for many hours.  One prisoner simply walked away.  He later savagely beat two women and took off with their car.   Both the state Corrections and Forestry Departments refused to release basic details of what occurred. They recently paid $5 million in taxpayers’ dollars to compensate the victims. (Oregonian 8/31/22)

•   Controlled burn becomes uncontrolled.  A Forest Service executive has been arrested on suspicion of reckless burning after a controlled burn in the Malheur National Forest escaped and spread to private ranchland, burning nearly 20 acres. (KGW-TV 10/20/22).

•   Housing agencies mishandle millions.  The Portland Housing Office ignored a cyber scam warning from the City Treasurer and it resulted in $1.4 million in stolen funds. Multnomah County didn’t pay attention to a housing nonprofit that was repeatedly overbilling ($525,000).   The county was the nonprofit’s only source of funding showing how many non-profits only exist to spend government money.  (Oregonian 8/22/22, WWeek 7/28,22)

•   Pandemic funds mess-ups.  Nearly 30,000 jobless people sued the Oregon Employment Department for sending them invoices for money owed when it turned out they didn’t owe anything.  The department refused to give back the improperly collected funds.  Also, state auditors said various agencies mishandled $5 million in federal Covid funds due to misspending, accounting errors, and other issues like paying workers with no evidence that they actually worked. (KGW 10,22, Statesman Journal 6/10/21)

*** Official ballots were sent to all Taxpayers Association of Oregon donors this month.  If you wish to participate in the future awards, please donate and jointhe fun, make a big difference.

Did you love these awards?   Appreciate how we keep track of politician mis-steps?   If so please help us out:  Donate online at OregonWatchdog.com (learn about a Charitable Tax Deduction or Political Tax Credit options to promote liberty).