I got in a little late so I had to find a seat up in the middle of the seating.  I noticed that I recognized most of the people, but my “Spidey Senses” told me something was wrong, but I let it go.

After I was introduced as a “celebrity among us”, I noticed that two ladies sitting in front of me were the only ones not laughing as well as one man off to my right.

Later I was nominated and accepted as a PCP and I spoke for a couple of minutes. I had filled out paperwork which included my own personal cell phone number, home address and email, assuming only GOP Party folks would have access to that.  I was also asked to sign in at the desk set up in back with much of the same information.

Toward the end of the meeting, the chairwoman acknowledged that “We have a special speaker from Occupy Salem” and everyone’s mouths dropped open and, lo and behold, the two ladies who didn’t smile at me got up to speak.  They babbled the usual “Occupy” statements and I didn’t give much attention to it, and most of the crowd left.  I did perk up a bit when one of them mentioned that “It was nice to meet Bill Post, who had operated the Occupy Scio event and how much that helped OUR movement here in Salem”.  That got me a bit interested, but otherwise my main concern was “How’d these people get in here?”

After speaking and the meeting pretty much breaking up, this lady hugged me and thanked me for Occupy Scio, and I just laughed and walked off.  I asked the woman who was with her who that was and I was told it was Michele Darr (see my previous story on her on Oregon Catalyst)! Michele Darr is the very person who LEADS the Occupy Salem movement and not only was she there, but there were at least 4 others as well, and Peter Bergel of Oregon PeaceWorks (turns out HE was the guy sitting off to my right that I thought looked familiar). I later learned that the Occupy folks had been videotaping and taking pictures during the meeting. 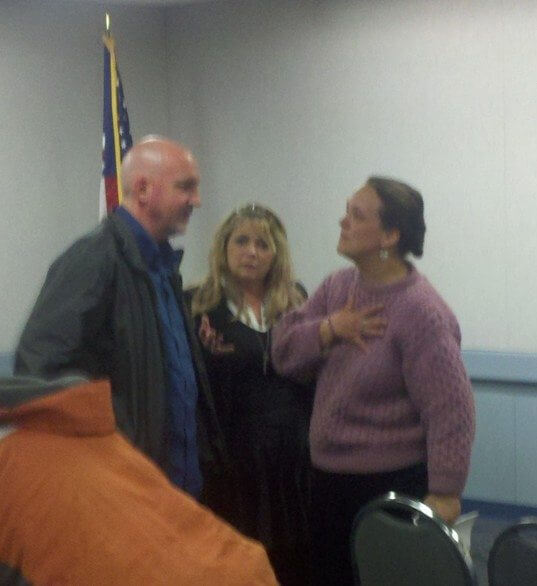 How did this happen? Is this the new way for Occupy to work?

I would love to know if this is happening at other meetings.