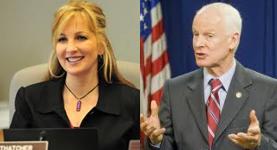 The 2012 Thomas Jefferson Award is being awarded to two outstanding lawmakers State Representative Kim Thatcher and State Representative Dennis Richardson. Representative Thatcher has a pioneer at government transparency efforts. Thatcher is also recognized for her work on citizen privacy issues and for a bill to repeal the failed and destructive Measure 66 &67 taxes. Dennis Richardson is being recognized for his budget leadership which helped to eliminate hundreds of millions of wasteful tax dollars so that the 2011 season could end without tax increases that liberals were demanding. Thatcher will be awarded the Thomas Jefferson Award at the 2012 Lazy-Fair on July 29th, Barton Park)

*** WINNER: Sam Adams, Portland Mayor:   Sam let Occupy Wall Street protesters illegally camp out without a permit for about 40 days (among the longest in the nation) which created chaos costing taxpayers $1.4 million in police overtime and $86,000 in park damages.  RUNNER UPS-  Dave Hunt, State Representative Apparently not liking the Oregon Independent Party as a former Democrat House Speaker, he supported a bill to write into state law making it illegal for the Independent Party to use the word “Independent” in their own name.  David Wu, Ex-Congressman.  Wu’s problems brought calls for a House ethics investigation, his staff fleeing & his resignation. Wu made Oregon a national joke when pictures emerged of him dressed in a tiger suit.

**** WINNER:  Bad Cut for Barbers: 82 year-old barber, Dale Smith, had his barber’s license revoked after 50 years in the business because the state requires routine “rigorous” re-testing and re-licensing of barbers to make sure they don’t forget how to cut hair.

**** WINNER: $65 Million Eco-shrine
The Oregon Sustainability Center costs $65 million of public funds (bonds, property taxes) and exceeds 20% of the price of an average building. It includes 60,000 square feet of solar panels, a 200,000 gallon cistern bucket to collect rain water, and a 200 foot underground geothermal well. Taxpayers foot the bill by $240,000 if it fails to get renters.

RUNNER-UPS:  – $250,000 “Deer on acid” statue: Tri-Met is building a ¼ million dollar baby-faced deer statue called “rebirth” despite a $17 million budget gap & declining bus routes.  – Bankruptcy Bridge (CRC) After 15 years of planning & $150 million spent on the Columbia River Crossing, a shovel has yet to be laid or final design decided. The staggering $3.5 billion plan adds no new (long-distance) lane capacity to the bridge it is replacing. One person was paid $10,000/month to sell the bridge to the public.

*** WINNER: Union “Free to Trespass” Card: Clackamas School Board considered a bill to give unions the power to trespass on non-union construction sites and interrupt work by conducting intrusive interviews with workers on why they do not join a union.