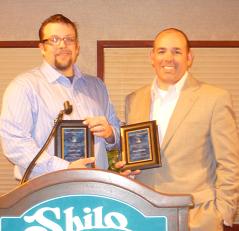 2010 Taxpayer Awards Winners
As presented at the Oregon Executive Club.

Below are the politician awards as determined by over 800 ballots.

Worst Politician of the Year Award

WINNER: Rep. Dave Hunt: Passing $2.4 billion in new taxes and trying to pass a bill that would have changed “no” votes to “yes” votes on referendum measures as a way to trick voters.

WINNER: BETC Tax Credit scam: Gov. Kulongoski lying and low-balling tax credit costs by hundreds of millions of dollars in order to get it to pass the Legislature.

WINNER 1,740 inmates released early: Thanks to the passage of HB 2007. Some have already recommitted their crimes.