In a certain sense, you almost have. The IRS employees that process refund checks have been furloughed. The federal shutdown last year delayed the release of refunds too but only by a week. An indefinite shutdown now means an indefinite delay in getting back the money the feds overcharged us.

Since the Republican Party is increasingly becoming the party of the lower-class, this will disproportionately impact people who voted for Donald Trump while the college educated urbanites that didn’t will be writing checks of their own on April 15th regardless. But I’m old enough to remember when the GOP only shut down the government for spending cuts, not spending increases.

The wall is a wasteful symbol of how far in the direction of big government this president has moved the party that nominated him. The least expensive means of reducing illegal immigration is the Reagan solution, deregulating the heavy-handed government interference in the freedom of American companies to hire whomever they prefer to hire and allowing the American tourist industry to host whomever it would choose to sell its hospitality to.

Instead, I see too many of my fellow Republicans talk about border security the way teacher unions talk about education – like there is a linear relationship between the amount of money thrown at a program and the public good that it will generate. Just as low student achievement does not necessarily imply we spend too little on public education, the continued existence of a tiny trickle of illegal immigration does not necessarily imply we’ve been spending too little on physical barriers.

If my use of the word “trickle” contradicts someone else’s preferred term, “crisis,” then perhaps it’s time for such a person to spend more time looking at actual data and less time watching Fox News. 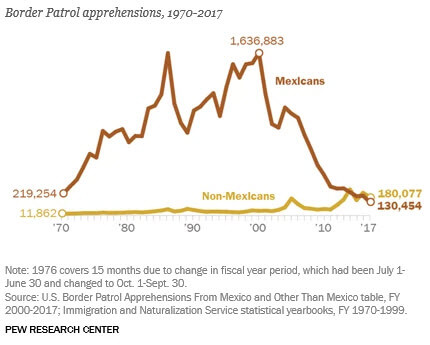 So when weighing the utility of spending more money on physical barriers on our southern border, it’s important to keep in mind that, whatever its benefits, stopping a million people a year from crossing that border illegally will not be one of them. Immigration policy has thus been very different than education policy in terms of outcomes. While Oregon’s K-12 education has not been getting much better over the past two decades, U.S. deterrence of illegal crossing has improved substantially. It would then be even more foolish to demand an exeleration of expenditures for education if test scores had improved as much as illegal border crossing has declined. So why doesn’t the populist demand for greater levels of government spending correlate to the declining magnitude of its need?

Perhaps my Facebook friends provide an answer. The popular perception that we have no obstacles down there seems to live on. I keep seeing this meme getting shared over and over again: 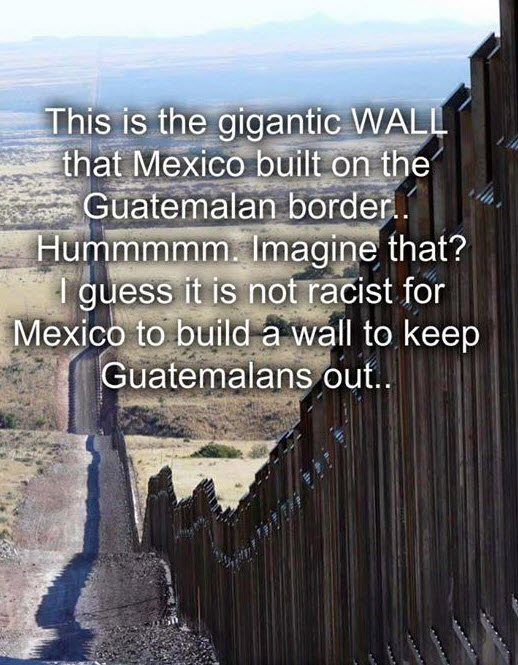 Whoever composed this viral spectacle of propaganda, be he your typical anti-immigration activist or a Russian agent, apparently didn’t know that Mexico’s border with Guatemala is a lush green jungle, not a dry tan desert. That is actually a picture of the well-fortified U.S. border in Arizona. It was lifted from an environmentalist’s blog which you can see here. 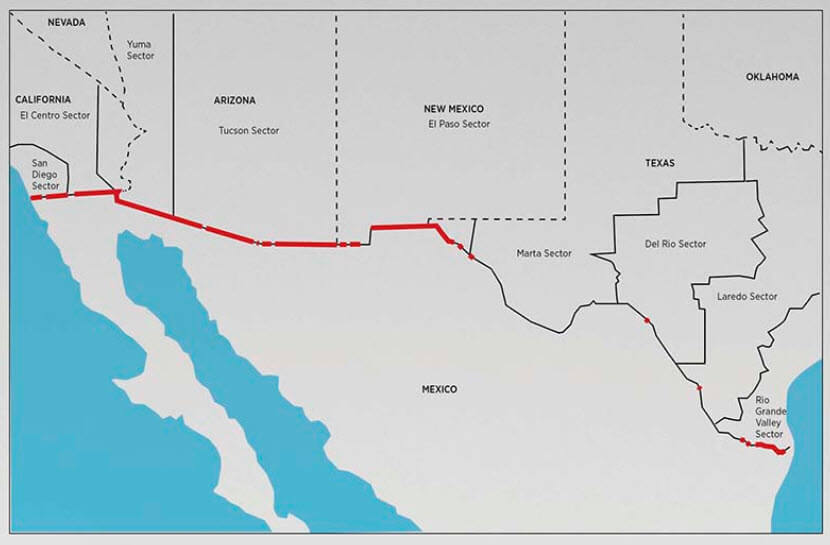 There is just no need to spend billions of dollars in the Marta, Del Rio, and Laredo sectors of Texas where few people are crossing. The terrain is doing the work for us for free.

Just as a lot of money doesn’t buy much light rail capacity, large appropriations won’t get us much border wall. The $5.6 billion Trump is asking for will not fill those gaps. Using his administration’s own rosy cost estimates, he’d be lucky to build a mere 200 miles. There has been a Go Fund Me page set up to receive voluntary donations, raising about $19 million which will buy less than one mile!

Certainly, enough tax refund money exists, being held up by the President’s brinkmanship to cover the amount of money he has shut the government down for. By the end of March last year, the IRS paid out $212 billion dollars in refunds to 73 million households.

What if the deal between House Democrats and the White House was to make wall funding reliant on the voluntary donation of tax refunds? I doubt it would raise much more than Go Fund Me already has. Perhaps it would build a few miles’ worth. After all, the things we could purchase with that cash for ourselves, our families, and our friends are so much more valuable than a wall would be. Indeed the same is true of federal spending on light rail, education, and many other items of the federal budget. But for those who donate their refunds to such a cause, at least they could proudly pat themselves on the back and tell themselves: “Mexico paid for it.”