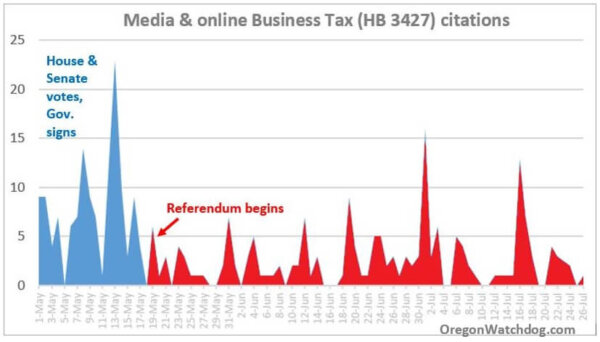 This year the Governor and the politicians passed out a $2.6 billion business sales tax (HB 3427). They tried to deflect criticism of the tax by not assigning an actual bill number until late in the game so the public could not target their complaints until it was almost too late. This sales tax, Oregon’s largest tax increase, was ramrodded through Session and signed into law in just about three weeks. Most businesses appeared to not even know what had just happened.

The politicians hoped the debate on this tax would go away. It didn’t.

A referendum petition drive was launched and the tax debate had just begun.

A media citation analysis of the tax shows that the articles on the tax were 128% greater after the bill passed than for when it was being debated.

The tax was swept up into the Senate walkout/Carbon Tax debate (see June 18th spike). As media outlets talked about the Carbon Tax they also mentioned the business tax.

Rarely a day went by all summer where this business sales tax (HB 3427) was not mentioned in the media in some form.

By June 30th, the politicians were alarmed enough at the tax debate (for which they tried to hide) that they schemed to kill the referendum petition drive altogether.

In the final hours of Legislative Session, they passed a bill that changed the tax and therefore voided all the names gathered by the petition. The politicians effectively sabotaged the petition voting process and disenfranchised thousands of Oregon voters who signed the petition. They shamelessly robbed the people of their right to vote on this tax.

Even though the politicians robbed people of their right to vote, the debate of this tax (HB 3427) kept going. The debate will continue as more and more businesses discover that they will have to pay it. The price tag is huge and many businesses are already leaving Oregon or closing. It is one Oregon’s worst and most expensive taxes ever passed.

The Taxpayer Association is committed to keeping this debate alive and exposing the politicians who voted for it.

— The Taxpayer Association was a leader in fighting Oregon’s largest tax increase (HB 3427), both lobbying in the State Capitol and in collecting repeal signatures before it was sabotaged by Governor Brown. Please support us with a simple donation.