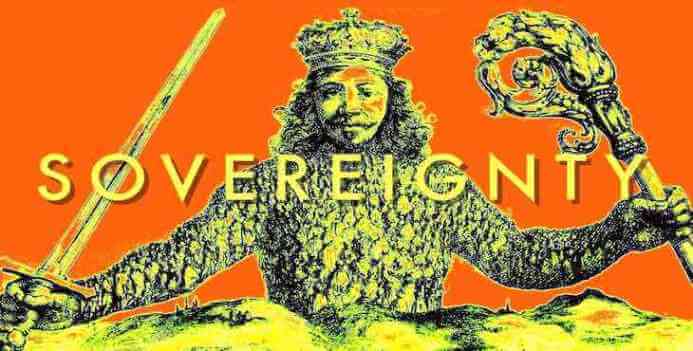 Sovereignty is supreme authority within a territorial entity. What makes a government legitimately sovereign? From a purely positive perspective, all governments that possess a reciprocity of expectations between the government and the governed are sovereign in the Weberian sense of that term, but Max Weber‘s famous definition that gets written into nearly every introductory political science textbook only covers the “is” of sovereignty. Ideology covers it in terms of “ought.”

The three primary ideologies look to three different places to find the source of sovereignty. For classical conservatives, there has been a vast diversity in specific sources, but throughout human history, they’ve shared one thing in common. It’s always something that transcends humanity as an authoritative marker of objective value. For religious political cultures that is of course God. For more secular societies like ancient China, it’s been found in the timeless authority of traditional social norms.

For classical liberals, sovereignty comes from the consent of the governed. Yet it’s too easy for 21st Century Americans to confuse that locution found in our Declaration of Independence with democracy qua democracy. Consent does not necessarily mean elections by universal suffrage. It simply means the acceptance that one’s life, liberty, and property are protected. If an individual does not believe his natural rights are sufficiently protected, then rebellion against the state is justified. If a preponderance of the governed feels this way as to make rebellion possible, then the government has lost its sovereignty.

The development of democracy in modern times was supported by liberals as a pragmatic tool to build a feedback loop to the government so as to avoid the need for insurrection. Liberals who have supported democracy have always been conscious of the need to limit the democratic process with enough friction to prevent an illiberal “tyranny of the majority” from emerging. At the time of America’s founding, liberals like James Madison, who drafted the U.S. Constitution, called these institutional restraints “republicanism.” It is now generally referred to as “liberal democracy.”

For Socialists, sovereignty comes from the “general will of the people,” an ambiguous term that tried to capture the notion of the collective desire of all to live a fulfilling life equal in status to his neighbor. Who decides what the people actually will in general? That is the vexing question that has caused socialists to have issues with democracy as well.

Socialists want social democracy, not liberal democracy. Many socialist in the past have placed little hope in the democratic process as we have come to recognize it, because the radical left has predicted the owners of capital will possess the ability to prevent the working class from voting together by imposing a false consciousness on them or perhaps prevent them from voting at all. These socialists could call the Union of Soviet Socialistic Republics, the Democratic Republic of Germany, and the Democratic Republic of Korea more democratic than the United States, with a straight face, because they would argue the USSR, DDR, and DRK gave the people what they really wanted. These socialists, called Leninists, placed more hope in a party that ruled as the “dictatorship of the proletariat,” acting as a “vanguard of the people” to force men to be free.

Most socialists today reject that, looking back to the 2nd International, a meeting of the world’s leftist parties in 1889 to craft a common political agenda. This global movement called for the founding of social democratic parties to fight the owners of capital with ballots not bullets.

Those social democratic parties rightly assume that the lower class will always constitute a governing majority in any population; so their grand strategy has been to transform constitutionally limited liberal democracies into more pure participation democracies while attempting to organize a political consciousness among the various groups of have-nots, to unite them in solidarity together. This is most likely what Bernie Sanders means by “democratic socialism,” but who knows for sure. He’s found affection for the Leninist variety at times too.

The primary ideologies have three different visions as to where the ultimate source of sovereignty lies. One thing all three have in common, however, is a complicated approach to democracy, which is ironic given the nearly ubiquitous lip service paid to democracy by nearly all politicians across the political spectrum.