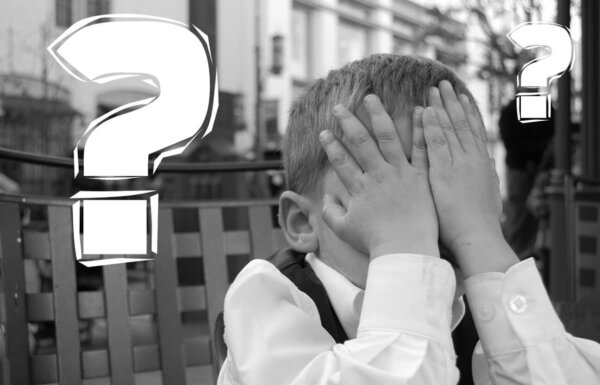 An Oregon taxpayers gives us a grim warning of what could happen in Oregon if Oregon passes SB 1530 Carbon Tax (72-cent gas tax carbon cap-and-trade) based on what his family experienced in Australia.

Read his testimony below:

“Oregonians need only to look at the dismal failure of Australia’s attempt to implement a carbon tax.  They learned the hard way and the result was two-fold:  (a) skyrocketing energy costs for consumers, particularly electricity bills for homeowners who could hardly afford the monthly increases and (b) no measurable decrease in the output of emissions.  Therefore, the country appropriately scrapped this ill-conceived scheme.  I can personally attest to the outlandish energy cost increases as my wife and I have family in Australia, and their electricity and gasoline costs became outlandish under this tax.”
Chad Riddle
Salem, Oregon

The Australian Carbon Tax was so bad that voters repealed it!!!

Here is what the Wall Street Journal said:

“After almost a decade of heated political debate, Australia has become the world’s first developed nation to repeal carbon laws that put a price on greenhouse-gas emissions…Australian voters turned against climate laws—recognized by the International Energy Agency as model legislation for developed countries—blaming them for rising energy bills and living costs…

” ‘Today the tax that you voted to get rid of is finally gone, a useless destructive tax which damaged jobs, which hurt families’ cost of living and which didn’t actually help the environment is finally gone,” a jubilant Mr. Abbott told voters in a news conference after the Senate’s decision.He said the carbon price was acting as a A$9 billion a year handbrake on the economy, which was adjusting to the end of a record mining investment boom that helped shield Australia through much of the recent global economic downturn.Without matching emissions policies in other industrialized countries, Mr. Abbott had said earlier the tax was an unfair shackle on local companies and individuals, unequaled except in Europe, where an emissions market has operated since 2005.”

Like Australian voters, Oregonians are revolting against this tax and hitting the streets: 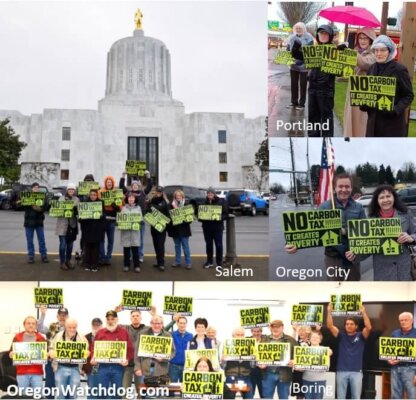 People are spreading the word online from their own home — such as the Spigariol family below. 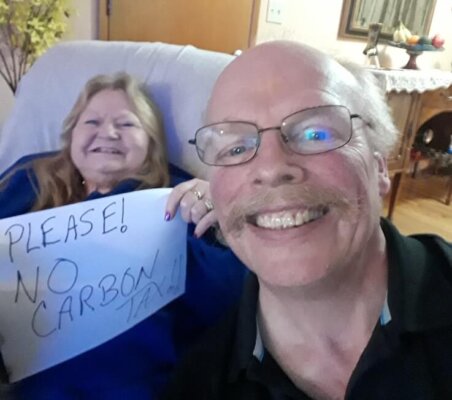 Taxpayer Association designed this cartoon to show you how the Carbon Tax works and has worked for California.