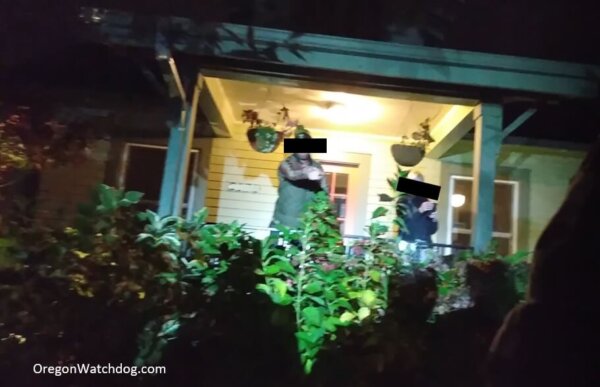 At the election night Portland protest one incident sparked a mob mentality moment.

Protestors took over residential streets being led by masked men armed with rifles. They began marching, shinning lights into people’s homes and at times chanting for residents to get out of their homes.

One man came out from his own house and said “Be peaceful.  Please don’t wreck anything.”   He even made a love sign over his heart saying loves them.  The photo captures the moment he pointed to the Biden-Harris lawn sign in his front yard to prove his liberal credentials.

The man tried to emphasize that he agreed with the crowd and that he just didn’t want them to wreck anything on their march (as previous marchers had done).

When one of the marchers (who happened to be white) came to the defense of the man and asked people to move on (which many in the crowd were urging), a black woman got into his face and told him to stop telling her what to do.   It exploded into an in-fighting yelling match between the two that included charges of racism.

After much yelling among the two incidences erupting at the same time and place, it eventually de-escalated, but revealed how unruly, volatile and mob-like these marches have become.  It is like a zone free of rules.

These neighbors have every reason to be afraid.  Along Stark street where it happened have been the scene of many acts of voilence over the past 100 days.

As stated, and shown int he photo below, masked men with large guns were patrolling the streets adding to the danger many neighbors must have felt. 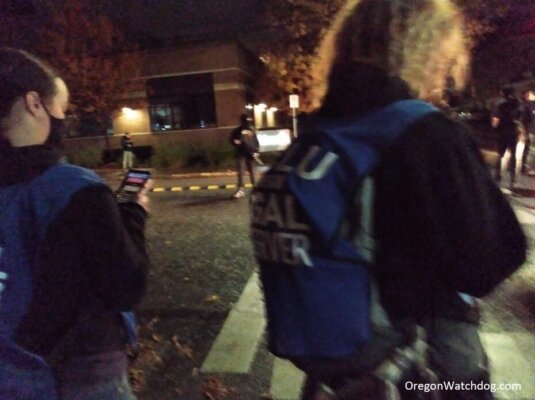 — Note: I have the video the whole exchange of the man outside his house but decided to refrain from posting it because I feel very sorry for this man and do not wish to make it worse.

Read also these other two articles about the same night: